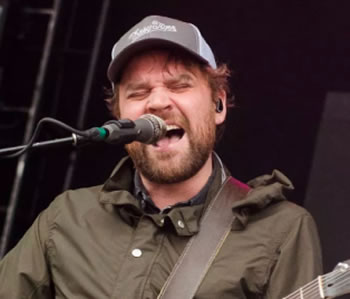 x of suicide on 10th May 2018, in Edinburgh, Scotland, U.K.
Scott Hutchison was reported missing by Scottish police and the members of Frightened Rabbit on 9th May 2018. Scott Hutchison was last seen on 9th May 2018 leaving a hotel in the South Queensferry district of the city. Scott had tweeted prior to his disappearance"Be so good to everyone you love. It's not a given. I'm so annoyed that it’s not. I didn't live by that standard and it kills me. Please, hug your loved ones", and "I'm away now. Thanks."
On 10th May 2018, the Chief Inspector of Police Scotland reported that they were searching the area around the Forth Road Bridge for Scott Hutchison, and were looking to contact two individuals who were spotted walking along the bridge the night he disappeared.
Scott Hutchison, described by his mother as a shy child, was born and raised in the Scottish Borders town of Selkirk, with his brother Grant. Moving to the city of Glasgow, Scott studied illustration at the Glasgow School of Art. He had said that he was there for four years and he didn't particularly want to be an illustrator, so he wanted to apply the rules that he learnt to everything he does.
Initially considering himself solely a guitarist, Scott Hutchison began singing at the age of nineteen, stating that up untill that point he was just a guitar player and that he didn't know he could sing and that he had been told that he could not. Scott's early songwriting influences included such American artists as Ryan Adams, Wilco and Laura Cantrell.
In 2003, Scott Hutchison began performing under the name Frightened Rabbit, a name given to him by his mother to describe his once shy nature. and began recording and performing with his brother the following year. The duo recorded the band's debut album, Sing the Greys, at The Diving Bell Lounge, with producer Marcus MacKay, and released it independently on local label, Hits the Fan, in 2006; the band signed soon after to Fat Cat Records.
Joined by guitarist Billy Kennedy, the band reissued the album on their new label and began work on its follow-up, The Midnight Organ Fight ib 2008, with producer Peter Katis, in Bridgeport, Connecticut. Influenced by the collapse of his relationship with his high school and college girlfriend Shell Jubin who was a housemate on Big Brother 5, the deeply personal album was released to widespread critical acclaim and increased the band's exposure significantly.
Owl John was a solo musical project by Scott Hutchison, formed in 2014. Regarding Owl John and his decision to release a solo record, Scott Hutchison noted that it was approximately ten years previously that he started a band called Frightened Rabbit. In that time he had dedicated so much of his life to that good wee band with a stupid name that he felt it was time to indulge Owl John.
Scott Hutchison recorded the project's sole album, Owl John, alongside his Frightened Rabbit bandmate Andy Monaghan and the band's touring guitarist Simon Liddell.
In January 2014, whilst touring in support of Frightened Rabbit's fourth studio album, Pedestrian Verse, Scott Hutchison expressed his desire to record solo mate

rial without the band, stating that the process would have to be different because otherwise he would just be going to make a Frightened Rabbit-sounding record, which he really don't want to do.
The idea for a solo album stemmed from Frightened Rabbit's label, Atlantic Records. The following month, work began on the album, on the Isle of Mull, with bandmate Andy Monaghan producing, alongside Simon Liddell. Released on 4th August 2014, the self-titled album debuted at number ninety-nine on the UK Albums Chart.
Scott Hutchison wrote and recorded with The Fruit Tree Foundation, a collaborative project featuring Scottish indie rock and folk musicians. The resulting album, First Edition, was released in 2011. Regarding the experience, Scott Hutchison stated that it was really beautifully done and that he thought it was such a great thing, and also personally, for him, that was his first taste of proper collaboration and it really changed his outlook on songwriting.
Scott Hutchison performed a guitar solo on the track, "A Bigger World", by the indie rock band The Birthday Suit, and is featured in its accompanying music video. The song was the first single to be released from the band's third studio album, 'A Hollow Hole of Riches' in 2014.

song:'Get Out' by Frightened Rabbit.