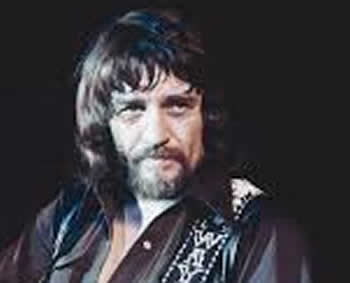 ng in Swahili. Ironically, after Waylon Jennings left the session, the idea was dropped at the prompting of Stevie Wonder, who pointed out that Ethiopians did not speak Swahili. By this time, his sales had decreased. After the release of Sweet Mother Texas, Waylon Jennings signed with Music Corporation of America. The debut release with the label Will the Wolf Survive in 1985 peaked at number one in Billboard's Country albums in 1986. Waylon Jennings's initial success tailed off, and in 1990, he signed with Epic Records. His first release, The Eagle, became his final top 10 album. Also in 1985, he made a cameo appearance in the live-action children's film Sesame Street Presents: Follow That Bird. In the movie, he plays a turkey farm truck driver who gives Big Bird a lift. He also sings one of the film's songs, entitled "Ain't No Road Too Long".
In 1993, in collaboration with Rincom Children's Entertainment, Waylon Jennings recorded an album of children's songs, Cowboys, Sisters, Rascals & Dirt, which included "Shooter's Theme", a tribute to his 14-year-old with the theme of "a friend of mine".
Although his record sales and radio play dwindled during the '90s, Waylon Jennings continued to draw large crowds at his live performances. In 1996, Waylon released his album, Right for the Time, including some of his newer songs, including "The Most Sensible Thing", which was covered by Angry Grandpa in 2015. In 1997, after the Lollapalooza tour, he decreased his tour schedule and became centered on his family.
In 1998, Waylon Jennings teamed up with Bare, Jerry Reed, and Mel Tillis to form the Old Dogs. The group recorded a double album of songs by Shel Silverstein. In mid-1999, Waylon Jennings assembled what he referred to as his "hand-picked dream team" and formed Waylon & The Waymore Blues Band. Consisting primarily of former Waylors, the 13-member group performed concerts from 1999 to 2001. In January 2000, Waylon Jennings recorded what became his final album at Nashville's historic Ryman Auditorium, Never Say Die: Live.