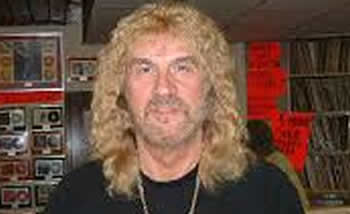 2017, surrounded by his family. Geoff was originally brought in as a second guitarist when Black Sabbath doubted whether they would even continue under that name. Geoff Nicholls then switched to bass when Geezer Butler left briefly, and then became the band's keyboardist upon Geezer's return and the decision to keep the Sabbath name.
Geoff Nicholls' first appearance on a Black Sabbath album was on Heaven and Hell in 1980, and he remained an official member until 1991, then regained member status from 1993 to 1996. He was an unofficial member once again since the reunion with Ozzy Osbourne in 1997. Although his main role with Black Sabbath was on the keyboard, Geoff Nicholls also played some rhythm guitar on the reunion tours, e.g., during Iommi's solo in "Snowblind" and a few tracks during the Headless Cross in 1989 and Forbidden in the 1995 tours.
Geoff Nicholls' involvement with Black Sabbath ended when Adam Wakeman, a member of Ozzy Osbourne's solo band, was chosen to play keyboards during Black Sabbath's 2004 and 2005 tours as part of Ozzfest, and Scott Warren handled keyboard duties on the 2007 Heaven & Hell tour.
Until his death, Geoff Nicholls played keyboards with former Black Sabbath singer Tony Martin, in the band 'Tony Martin's Headless Cross'. Geoff had previously performed on both of Tony