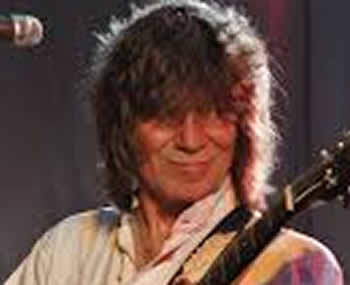 cancer at his home in Dorset, United Kindom. His final recording with Hawkwind was a re-recording of Master of the Universe for the compilation album Spacehawks.
Hugh Lloyd-Langton's health had been generally poor for a decade and he was quite frail, with several broken bones and minor injuries, He rarely let fans down though as he once played a gig with a broken arm, reworking his solos on the fly so that he could play them within just one small section of his guitar fretboard..

Hugh Lloyd-Langton was born in Harlesden, north west London and as a member of Hawkwind he appeared on their first album, 'Hawkwind', before he ever left them. He also played guitar for Widowmaker, Budgie, and Leo Sayer during the 1970s, then rejoined Hawkwind in 1979, appearing on the Live Seventy Nine album release from that year and their subsequent Levitation album .
Hugh continued performing with Hawkwind until 1988, after which he made occasional guest appearances, then rejoined for a brief spell in 2001-2002 until ill health, then Legionnaires' disease, forced him to leave once more. He sometimes played solo as an acoustic support act for Hawkwind, including at The Brook in Southampton in December 2009. Acoustic slots at English charity (playing for free) and space rock events were also common throughout this decade.