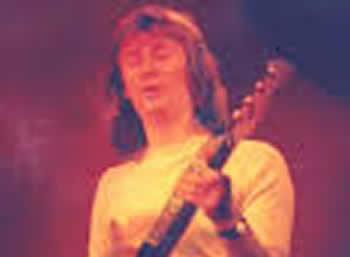 Nashville, Tennessee, U.S.A..
Dee was born David Dee Murray Oates on 3rd April 1946 in Gillingham, Kent, U.K. and before joining Elton John as his touring sidemen, Dee was a member of the Spencer Davis Group in 1969.
Dee Murray joined Elton John as his road sidemen in 1970, and first appeared together on disc with Elton on "Amoreena" from the 1970 studio album Tumbleweed Connection. The following year, he was featured on the live album 17-11-70. While he was Elton John's constant touring bandmate, his record company initially only allowed him to play on just one track per studio album. This changed with Honky Château in 1972 when Elton John exerted some of his skyrocketing popularity at the time to convince DJM to allow Dee Murray to also become a full-time recording member of his band. Along with fellow new recruit Davey Johnstone on guitars, banjo, mandolin, sitar, fretted string instruments and backing vocals, Dee Murray played on Elton John's hit albums, including the milestone album Goodbye Yellow Brick Road, singles, and world tours for several years. In 1975, after recording Captain Fantastic and the Brown Dirt Cowboy, Dee Murray was released from the band because Elton wanted to achieve a different sound. He said at the time "The band always rattled along. I want it to chug".
In 1977, Dee Murray briefly joined Procol Harum on a North America tour promoting their last 1970s album, Something Magic, although he never recorded with the group. Between 1978 and 1979, Dee Murray worked as part of Alice Cooper's backing band. According to music site AllMusic.com, he played on Alice Cooper's hit album 'From the Inside'.

Dee Murray returned to tour and play sessions with Elton John, starting with 21 at 33 in 1980. He backed Elton John during his landmark concert in New York City's Central Park before more than 400,000 fans on the Great Lawn on 13th September 1980, and appeared on The Fox in 1981. Dee went on to contribute all the bass tracks on Jump Up! in 1982, and joined guitarist Davey Johnstone for the Jump Up! Tour, followed by albums and tours for Too Low for Zero (1983) and Breaking Hearts (1984). The group then disbanded, reuniting once more to record backing vocals on Reg Strikes Back in 1988.
In the 1980s, Dee Murray played on numerous Nashville sessions for artists such as Michael Brown, Lewis Storey, Beth Nielsen Chapman and John Prine, amongst others.

song:'Somebody Help Me' by The Spencer Davis Group.