Delores O'Riordan died at the Hilton hotel in Mayfair, London, UK on 15th 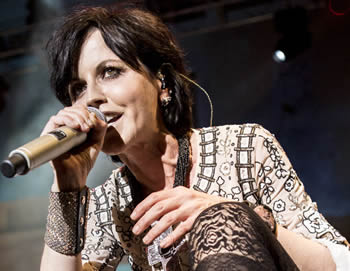 January 2018, at the age of forty-six. She had been in London for a recording session. The coroner's office ruled that she died as a result of accidental drowning due to alcohol intoxication.
A three-day memorial, with Delores lying in public repose in her hometown in an open casket, lasted from 20th untill 22nd January at St Joseph's church. On 23rd January, she was buried after a service at Saint Ailbe's Roman Catholic Church in Ballybricken, County Limerick, Ireland. At the end of the service the Cranberries' song "When You're Gone" was played.
Delores O'Riordan was buried alongside her father in the same grave at Friarstown, County Limerick, Ireland.
Funeral plans included a service reserved for extended family and close friends. A three-day memorial in her hometown, with Delores lying in repose, lasted from 20–22 January at St Joseph's church. Delores's songs were played, while photographs of her performing and one of her with Pope John Paul II were placed along the walls.
On 23rd January, she was buried after a service at Saint Ailbe's Roman Catholic Church, Ballybricken, County Limerick; it began with the studio recording of "Ave Maria" as sung by Delores O'Riordan and Luciano Pavarotti. At the end of the service the Cranberries' song "When You're Gone" was played. Among the attendees at her funeral were her mother, Eileen; her three children, Taylor, Molly, and Dakota and their father, Delores's former husband, Don Burton; her sister, Angela, and brothers Terence, Brendan, Donal, Joseph, and PJ; Cranberries members Noel Hogan, Mike Hogan, and Fergal Lawler; former rugby union player Ronan O'Gara, and her boyfriend Olé Koretsky.
Delores admired Pope John Paul II, whom she met twice, in 2001 and 2002. She performed at the invitation of Pope Francis in 2013 at the Vatican's annual Christmas concert.
In May 2017, Delores had publicly discussed her bipolar disorder, which she said had been diagnosed two years earlier. That same month, the Cranberries cited her back problems as the reason for cancelling the second part of the group's European tour. In late 2017, Delores said she was recovering and performed at a private event. Her final public performance was on 14th December 2017 in New York at a holiday party for Billboard-Hollywood Reporter Media Group.
Dolores O'Riordan was born on 6th September 1971 in Ballybricken, County Limerick, the youngest of nine children, two of whom died in infancy. Her six siblings include Terence, Brendan, Donal, PJ, Joseph, and Angela. Her father, Terence Patrick "Terry" O'Riordan was a farm labourer who was left unable to work due to brain damage caused by a motorbike accident in 1968. Her mother, Eileen, was a school caterer. She attended Laurel Hill Coláiste FCJ school in Limerick. She later admitted in an interview in 1995 that she had neglected her lessons in favour of writing music and song, although at school she became head girl. Delores O'Riordan left school without any qualifications.
In 2013, O'Riordan described how, from the age of eight, she was sexually abused for four years by someone she trusted.[13]
In 1989, brothers Mike and Noel Hogan formed The Cranberry Saw Us with drummer Fergal Lawler and singer Niall Quinn, in Limerick, Ireland. Less than a year later, Quinn left the band. The remaining band members then placed an advertisement for a female singer. Delores O'Riordan responded to the advertisement and auditioned by writing lyrics and melodies to some existing demos. When she returned with a rough version of "Linger", she was hired, and they recorded Nothing Left At All, a three-track EP released on tape by local record label Xeric Records, which sold 300 copies. The group changed their name to "The Cranberries". The owner of Xeric Studios, Pearse Gilmore, became their manager and provided the group with studio time to complete another demo tape, which he produced. It featured early versions of "Linger" and "Dreams", which were sent to record companies throughout the UK.
This demo earned the attention of both the UK press and record industry and sparked a bidding war between major British record labels. Eventually, the group signed with Island Records. As part of The Cranberries she released along with them five albums: Everybody Else Is Doing It, So Why Can't We? in 1993, No Need to Argue in 1994, To the Faithful Departed in 1996, Bury the Hatchet in 1999, and Wake Up and Smell the Coffee in 2001, and a greatest-hits compilation, Stars: The Best of 1992–2002.
Delores O'Riordan has been recognised as a style icon, sporting a pixie cut or buzzed hair in the 1990s and performing barefoot, saying that it just feelt comfortable and honest to pull your toes along the ground. On 18th July 1994, Delores O'Riordan married Don Burton, the former tour manager of Duran Duran, at Holy Cross Abbey in Co. Tipperary. The couple had three children; Taylor, Molly and Dakota. In 1998, the couple bought a 61-hectare stud farm, called Riversfield Stud, located in Kilmallock, County Limerick, selling it in 2004. They then moved to Howth, County Dublin, and spent summers in a log cabin in Buckhorn, Ontario, Canada.
In September 1995, she performed Ave Maria along with Luciano Pavarotti. Princess Diana, who attended the live performance, told Delores that the song brought her to tears.
In 2003, the Cranberries decided to take a temporary time-out to experiment on solo projects.
In 2004, Delores appeared with the Italian artist Zucchero on the album Zu & Co., with the song "Pure Love". The same year she worked with composer Angelo Badalamenti of Twin Peaks fame on the Evilenko soundtrack, providing vocals on several tracks, including "Angels Go t

o Heaven", the movie's theme song.
In 2005, she appeared on the Jam & Spoon's album Tripomatic Fairytales 3003 as a guest vocalist on the track "Mirror Lover". She made a cameo appearance in the Adam Sandler comedy Click, released on 23 June 2006, as a wedding singer performing an alternate version of The Cranberries' "Linger", set to strings. Her first single, "Ordinary Day", was produced by BRIT Awards winner, Youth, whose previous credits included The Verve, Embrace, Primal Scream, U2, and Paul McCartney.
Are You Listening? was released in Ireland on 4th May 2007, in Europe on 7th May, and in North America on 15th May. "Ordinary Day" was its first single, released in late April. The video for "Ordinary Day" was shot in Prague. In August "When We Were Young" was released as the second single from the album.
In 2006, Delores O'Riordan was listed among the ten richest women in Ireland.
Delores' second album, No Baggage, featuring eleven tracks, was released in August 2009.
In 2008, Delores O'Riordan won an EBBA Award. Every year the European Border Breakers Awards recognize the success of ten emerging artists or groups who reached audiences outside their own countries with their first internationally released album in the past year.
In 2009, Delores O'Riordan and her family moved full-time to Buckhorn. In August 2013, she returned to live in Ireland. O'Riordan and her husband Burton ended their relationship in late 2014 after 20 years together. They later divorced.
In January 2009, the University Philosophical Society (Trinity College, Dublin) invited The Cranberries to reunite for a concert celebrating Delores O'Riordan's appointment as an honorary member of the Society, which led the band members to consider reuniting for a tour and a recording session.
On 25th August 2009, while promoting her solo album No Baggage in New York City on 101.9 RXP radio, O'Riordan announced the reunion of the Cranberries for a world tour. The tour began in North America in mid-November, followed by South America in mid-January 2010 and Europe in March 2010. Also touring with the original members of The Cranberries was Denny DeMarchi, who played the keyboard for Delores O'Riordan's solo albums. The band played songs from Delores's solo albums, many of the Cranberries' classics, as well as new songs. On 9 June 2010 The Cranberries performed at the Special Olympics opening ceremony at Thomond Park in Limerick; it was the first time the band had performed in their native city in over 15 years.

song: 'The Journey' by Delores O'Riordan