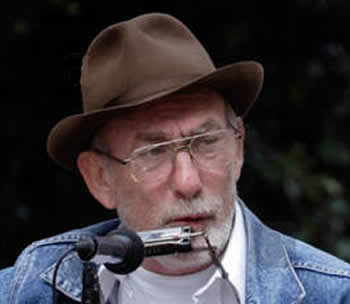 Don was born Donald Eric Don Partridge in Bournemouth, Dorset, U.K. on 27th October 1941. In the early 1960s, he developed his busking and performing skills firstly in London and Continental Europe and busking around the coastal towns of South West England. He also played in British and Irish folk clubs, initially singing British, Irish and American folk songs and blues with a guitar. In 1964, he and his friend Alan Young were described in the London Evening Standard as the first young street musicians to be seen in London since World War II . Later, inspired by American singer Jesse Fuller, Don constructed his first one-man band and started writing some of his own compositions. In London in 1966, together with fellow busker Pat Keene as "The Brotherhood", he recorded his first album entitled Singin' 'n' Sole-in. Soon afterwards, he found that he gained more attention by performing as a one-man band, playing guitar, kazoo and harmonica (both held on a harness), bass drum (on his back), cymbals and tambourine at the same time. He was frequently arrested and fined, but gained a local following and made TV appearances on several shows, including the Eamonn Andrews Show.
Record company executive Don Paul then gave him a recording contract with Columbia Records. His debut recording of his own song, "Rosie", reached number 4 in the UK Singles Chart in March 1968. Following this success, Don Partridge quit busking for a more orthodox professional singing career. On 5th April 1968, Don appeared alongside Amen Corner, Gene Pitney, Status Quo and Simon Dupree and the Big Sound at The Odeon Theatre, Lewisham, London, on the opening night of a twice nightly UK tour covering 27 venues in 32 days. Later in May 1968, he performed at the NME Musical Awards Show at Empire Pool, Wembley to a crowd of 10,000 alongside multiple artists including the Rolling Stones. His second hit quickly followed when "Blue Eyes" reached number 3 in June 1968, and he was featured on the front cover of the pop weekly Disc. He also released a self-titled LP, which included folk and blues songs by Lead Belly, Bill Broonzy and Oscar Brand along with versions of Otis Redding's "(Sittin' On) the Dock of the Bay" and Robin Williamson's "First Girl I Loved", and several of his own compositions. He spent the summer of 1968 performing nightly shows at Blackpool Pier, alongside Solomon King, Les Dawson and others.
Intending a farewell to his street musician friends, he hired the Royal Albert Hall in January 1969 and put on a "Buskers Concert" before an audience of 3,700, featuring buskers who would all share the profits equally. A concert album, The Buskers, was released in 1969, and Don Partridge's single "Breakfast on Pluto" reached number 26 on the UK chart. Don Partridge later assembled a Buskers' Tour, including Dave Brock and guitarist Gordon Giltrap, which travelled to concert venues around the UK in an old London Transport red double-decker bus, delivering buskers concerts at ten different venues, including sell-outs in Oxford and Newcastle and the next concert venue being in Glasgow. In July 1969, Don Partridge starred with Love Affair, Status Quo, Alan Price, Yes, Grapefruit and Jimmy James & The Vagabonds in an Oxfam charity concert held at Wembley Stadium. He also journeyed to the U.S.A to promote the Tom Courtenay movie Otley, which featured his song "Homeless Bones" as the

opening theme.
By autumn 1969, together with guitarist Gordon Giltrap and other members, he had founded the group Accolade. This was an acoustic band, who developed a style of folk/jazz fusion. They recorded two albums, the second after Giltrap had left, and one single, before finally splitting up in 1971. Don Partridge returned to busking, and after journeying throughout England and Wales in a gypsy caravan, he later moved to Sweden where in 1974 he recorded the album, Don Partridge and Friends. He continued to write music based on his relationships, travels and experiences, then formed a new group in Sweden called Slim Volume which toured the country giving concerts based on original songs. In 1976 he travelled as a busker throughout Canada, and played at the Montreal Olympic Games. He later toured much of Western Europe busking, spending prolonged periods in Gothenburg, Copenhagen, Munich and Amsterdam before returning to Sweden. In 1982, the album Street Harvest was recorded and released in Stockholm, based mainly on his own compositions with acoustic guitar arrangements. Don later returned to England, living first in Barwell, Leicestershire then on a canal barge, followed by Brixham, Devon, before finally settling in Seaford, Sussex, in 1990.
In 2001, Don recorded the album The Highwayman, with accompaniment by Herbie Flowers, Nick Pynn and Richard Durrant. The album contained tracks inspired by his experiences of life on the road, including the autobiographical song "The Night I Met Elton John" and a treatment of Alfred Noyes' verse "The Highwayman". In 2005, Don Partridge returned to public attention when his song "Breakfast on Pluto" was included in the soundtrack to the film Breakfast on Pluto. Don Partridge joined indie pop/trip hop duo Lemon Jelly on tour in the UK the same year. He also made two appearances on the BBC Television comedy music quiz show, Never Mind The Buzzcocks.
<<go to top>>

song:'Breakfast on Pluto' by Don Partridge