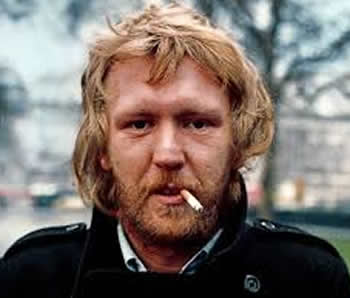 UK.
1973 found Harry Nilsson back in California, and when John Lennon moved there during his separation from Yoko Ono, the two musicians rekindled their earlier friendship. John Lennon was intent upon producing Harry Nilsson's next album, much to Harry Nilsson's delight. However, their time together in California became known much more for heavy drinking than it did for musical collaboration. In a widely publicized incident, the two were ejected from the Troubadour nightclub in West Hollywood for drunken heckling of the Smothers Brothers.
To make matters worse, at a late night party and jam session during the recording of the album, attended by Lennon, McCartney, Danny Kortchmar, and other musicians, Harry Nilsson ruptured a vocal cord, but he hid the injury for fear that Lennon would call a halt to the production. The resulting album was Pussy Cats. In an effort to clean up, Lennon, Harry Nilsson and Ringo Starr first rented a house together, then Lennon and Harry Nilsson left for New York. After the relative failure of his latest two albums, RCA Records considered dropping Harry Nilsson's contract. In a show of friendship, Lennon accompanied Harry Nilsson to negotiations, and both intimated to RCA that Lennon and Starr might want to sign with them, once their Apple Records contracts with EMI expired in 1975, but would not be interested if Harry Nilsson were no longer with the label. RCA took the hint and re-signed Harry Nilsson (adding a bonus clause, to apply to each new album completed), but neither Lennon nor Starr signed with RCA.
Harry Nilsson's voice had mostly recovered by his next release, Duit on Mon Dei in 1975. Finally, Harry Nilsson recorded what he later considered to be his favorite album Knnillssonn in 1977. With his voice strong again, and his songs exploring musical territory reminiscent of Harry or The Point!, Harry Nilsson anticipated Knnillssonn to be a comeback album. RCA seemed to agree, and promised Harry Nilsson a substantial marketing campaign for the album. However, the death of Elvis Presley caused RCA to ignore everything except meeting demand for Presley's back catalog, and the promised marketing push never happened. This, combined with RCA releasing a Harry Nilsson Greatest Hits collection without consulting him, prompted Harry Nilsson to leave the label.