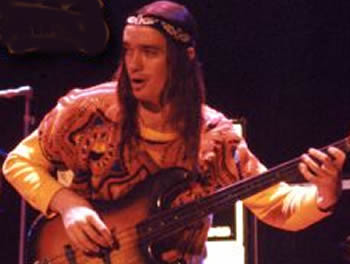 ber 1987 when he was disconnected from a life support system at Broward General Medical Center in Fort Lauderdale, Florida, U.S.A.
On 11th September 1987 Jaco visited the Midnight Bottle Club in Wilton Manors, Florida and kicked in a glass door after being refused entrance to the club. He was then engaged in a violent confrontation with the club's bouncer, who had a black belt in karate. As a result Jaco Pastorius was hospitalized for multiple facial fractures and injuries to his right eye and left arm and then fell into a coma. A massive brain hemorrhage a few days later led to his brain death.
Luc Havan, the bouncer, faced a charge of second-degree murder. He pleaded guilty to manslaughter and was sentenced to twenty-two months in prison and five years' probation. After serving four months in prison, he was paroled for good behavior.
Jaco Pastorious was born John Francis Pastorius on 1st December 1951, in Norristown, Pennsylvania, U.S.A. He was the oldest of three boys born to Stephanie, his Finnish mother, and Jack Pastorius, a charismatic singer and jazz drummer who spent much of his time on the road. His family moved to Oakland Park in Fort Lauderdale when he was eight.
Jaco Pastorious was energetic and spent much of his time shirtless on the beach, climbing trees, running through the woods, and swimming in the ocean. He attended St. Clement's Catholic School in Wilton Manors and was an altar boy at St. Clement's Church. His confirmation name was Anthony, thus expanding his name to John Francis Anthony Pastorius. He was intensely competitive and excelled at baseball, basketball, and football.
Jaco Pastorious played drums until he injured his wrist playing football when he was thirteen. The damage was severe enough to warrant corrective surgery which also inhibited his ability to play the drums.
By 1968–1969, at the age of seventeen , Jaco Pastorious had begun to appreciate jazz and had saved enough money to buy an upright bass. Its deep, mellow tone appealed to him, though it strained his finances. He had difficulty maintaining the instrument, which he attributed to the humidity in Florida. When he woke one day to find it had cracked, he traded it for a 1962 Fender Jazz Bass.
In the early 1970s, Jaco Pastorious taught bass at the University of Miami, where he befriended jazz guitarist Pat Metheny, who was also on the faculty. With Paul Bley, Pastorius and Metheny recorded an album, later titled Jaco (Improvising Artists, in 1974). Jaco Pastorious then played on Metheny's debut album in 1976. He recorded his own debut solo album, Jaco Pastorius in 1976 with Michael Brecker, Randy Brecker, Herbie Hancock, Hubert Laws, Pat Metheny, Sam & Dave, David Sanborn, and Wayne Shorter.
Before recording his debut album, Jaco attended a concert in Miami by the jazz fusion band Weather Report. After the concert, he approached keyboardist Joe Zawinul, who led the band. As was his habit, he introduced himself by saying, "I'm John Francis Pastorius III. I'm the greatest bass player in the world." Zawinul admired his brashness and asked for a demo tape. After listening to the tape, Zawinul realized that Pastorius had considerable skill. They corresponded, and Jaco sent Zawinul a rough mix of his solo albu

m.
After bassist Alphonso Johnson left Weather Report, Zawinul asked Jaco to join the band and he made his band debut on the album Black Market in 1976, in which he shared the bass chair with Johnson. Jaco Pastorius was fully established as sole band bass player for the recording of Heavy Weather in 1977, which contained the Grammy-nominated hit "Birdland".
During his time with Weather Report, Jaco Pastorius began abusing alcohol and illegal drugs, which exacerbated existing mental problems and led to erratic behavior. He left Weather Report in 1982 due to clashes with tour commitments for his other projects, plus a growing dissatisfaction with Zawinul's synthesized and orchestrated approach to the band's music.
Warner Bros. signed Jaco Pastorius to a favorable contract in the late 1970s based on his groundbreaking skill and his star quality, which they hoped would lead to large sales. He used this contract to set up his Word of Mouth big band which consisted of Chuck Findley on trumpet, Howard Johnson on tuba, Wayne Shorter, Michael Brecker, and Tom Scott on reeds, Toots Thielemans on harmonica, Peter Erskine and Jack DeJohnette on drums, and Don Alias on percussion. This was the group that helped record his second album, Word of Mouth in 1981.
In 1982, Jaco toured with Word of Mouth as a twenty-one piece big band. While in Japan, to the alarm of his band members, he shaved his head, painted his face black, and threw his bass guitar into Hiroshima Bay. Jaco was diagnosed with bipolar disorder in late 1982 after the tour. He had shown signs of bipolar disorder before his diagnosis, but these signs were dismissed as eccentricities, character flaws, and by Pastorius himself as a normal part of his freewheeling personality.
Despite attention in the press, Word of Mouth sold poorly and Warner Bros. was unimpressed by the demo tapes from Holiday for Pans. Jaco Pastorius released a third album, Invitation in 1983, a live recording from the Word of Mouth tour of Japan. Jaco had little success for the remainder of his life.