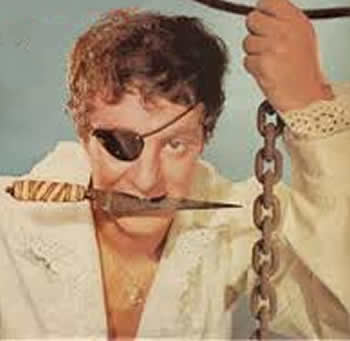 e car in which he was travelling as a passenger engaged in a head-on collision with one driven by a man who's seventeen-year-old girlfriend also died in the accident. Johnny was cremated at Golders Green Crematorium in North London, United Kingdom.

Johnny Kidd, birth name Frederick Albert Heath, was born on 23rd December 1935 in Willesden, North London, United Kindom and began playing guitar in a skiffle band in around nineteen-fifty-six. The group, known as "The Frantic Four" and later "The Nutters", covered primarily skiffle, pop and rockabilly music. Simultaneously Johnny Kidd was proving to be a prolific writer; penning most of thirty songs in just over three months.

In 1959 Johnny Kidd and his band were given a recording test for their first single, a rocker titled "Please Don't Touch". A contract with HMV quickly followed and the group were then informed during the session that their name "Freddie Heath and the Nutters" would be changed to Johnny Kidd & the Pirates. "Please Don't Touch" would reach the low twenties of the UK music charts. Although it is not as well known as Johnny Kidd's later song "Shakin' All Over", it is a stand-out among other British rock songs of the time. Unlike Billy Fury or Marty Wilde, Johnny Kidd does not sing in an imitation voice of Elvis Presley or one of his American contemporaries. The song also bears a smooth harmony and contains no clear references to the rockabilly style.
Johnny Kidd's most famous song as a composer was "Shakin' All Over", which was a Number 1 UK hit and the band's finest hour in 1960. Johnny Kidd's own version did not chart outside of Europe, but two cover versions did: The Guess Who topped the Canadian charts with their 1965 version of "Shakin' All Over", and in Australia, Normie Rowe topped the charts with it later the same year. The song was originally to be a B-side to the Ricky Nelson cover "Yes, Sir That's My Baby". Johnny Kidd was told that a self-penned song could be used and together with The Pirates the new number was written in the basement of the Freight Train coffee bar the day prior to recording. In addition to Johnny Kidd (vocals), Alan Caddy (guitar), Clem Catti

ni (drums) and Brian Gregg (bass) session guitarist Joe Moretti was called in by Kidd and Caddy to play lead guitar. It was Moretti who created the songs signature sound by sliding Brian Gregg's cigarette lighter up and down the fret-board of his guitar. It has been covered by The Who on the classic Live at Leeds album. Iggy Pop also included it on his solo album Avenue B. Other covers have included Vince Taylor and the Playboys, the rock group Humble Pie and The Swinging Blue Jeans. The fact that the song continues to be covered some 50 years after its first recording is a testimony to Johnny Kidd.

The song marked the peak which Johnny Kidd would not reach again. Future records did not fare as well in the charts. In 1961 Cattini, Caddy and Gregg left the band and would later play for Joe Meek in The Tornados. Kidd now assembled a new band of Pirates. Johnny Spence was now added to bass, Frank Farley to drums and later Mick Green would become guitarist. The band now toured extensively throughout England and into Europe. Adopting a more beat-influenced style, the group reached the British Top 5 with "I'll Never Get Over You" in 1963; penned by future pop impresario Gordon Mills. In time a stage act had also emerged with Johnny Kidd and the Pirates dressed as actual Pirates. Johnny Kidd would don an eye-patch and carry a cutlass which he would swing around on stage, damaging the wooden framework, and high kick in time with the music of the band. By 1964 the "British Invasion" was taking shape and Johnny Kidd was left in the shadows. Johnny Kidd had another new group by this stage "The New Pirates" but recordings had now become covers of R&B and pop songs. By 1966 it would seem that Johnny Kidd was on the verge of a re-emergence but this was soon to be cut short.

Do you like this website? If so, then please copy and email the link:
http://www.rockapaedia.com
to your friends, colleagues and aquaintances. Thankyou..

song: 'Shakin' All Over' by Johnny Kidd