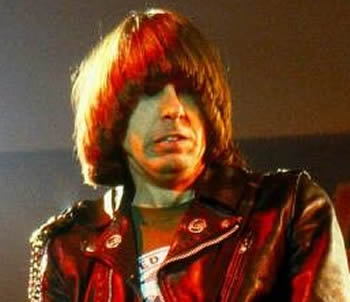 th September 2004 after five years with prostate cancer and less than one month before his fifty-sixth birthday.

After his death, his remains were cremated with his wife keeping his ashes. Johnny's wife Linda also oversaw the creation and erection of an eight foot tall bronze memorial of Johnny designed by Wayne Toth at the Hollywood Forever Cemetery in Los Angeles, California, U.S.A.

Johnny Ramone's father was a strict disciplinarian but Johnny's early adulthood was marked by bouts of delinquency.

In 1983, Johnny Ramone was severely injured in a fight with Seth Macklin of the band Sub Zero Construction. He was saved by emergency brain surgery. This incident was said to have inspired the next album's title, Too Tough to Die. He never spoke of the incident in the subsequent years.

Johnny Ramone married his wife Linda in 1994 at the office of the city clerk in New York City. She had originally dated Joey Ramone but left him for Johnny. Joey and Johnny continued to tour as the Ramones after this, but their relationship worsened and they stopped talking to each other.

Johnny Ramone was a Roman Catholic as noted in his autobiography Commando. Though he considered himself a religious Christian he did not attend church, due to physical abuse he suffered at the hands of nuns as a youngster.
Johnny Ramone was born John William Cummings in Queens, New York, U.S.A. on 8th October 1948, the only child of a construction worker of Irish descent. He was raised in the Forest Hills, Queens neighborhood of New York City, where he grew up absorbing rock music.

As a teenager, Johnny played in a band called the Tangerine Puppets alongside future Ramones drummer Tamás Erdélyi (better known as Tommy Ramone). As a teenager, he was known as a "greaser", though he was later described as a tie-dye-wearing Stooges fan. He was a lifelong New York Yankees fan.

Johnny also worked as a plumber with his father before the Ramones became successful, at one point attended military school, and briefly attended college in Florida.

Johnny met future bandmate Douglas Colvin, (later to become Dee Dee Ramone), in the early 1970s while delivering dry cleaning. They would eat lunch together and discuss their mutual love of bands like the Stooges and MC5. Together they went to Manny's Music in New York City in January 1974, where Johnny bought a used blue Mosrite Ventures II guitar for just over $54. On the same trip, Dee Dee bought a Danelectro bass. They collaborated with future bandmate Jeffrey Hyman, (later to become Joey Ramone), to form the Ramones with Richie Stern on bass. Stern left after a few rehearsals. Tommy joined t

he Ramones in the summer of that year after public auditions failed to produce a satisfactory drummer.

Alongside his music career, Johnny appeared in nearly a dozen films (including Rock 'n' Roll High School) and documentaries. He also made television appearances in shows including The Simpsons and Space Ghost Coast to Coast.

song:'Poison Heart' by The Ramones