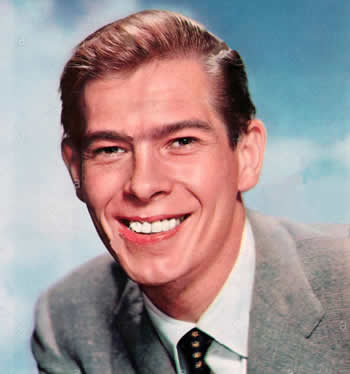 ely seen American program that officially changed its title in 1955 to The Ed Sullivan Show.
Johnnie Ray's performing style included theatrics later associated with rock and roll, including tearing at his hair, falling to the floor, and crying onstage. Johnnie Ray quickly earned the nicknames "Mr. Emotion", "The Nabob of Sob", and "The Prince of Wails", and several others.
20th Century Fox capitalized on his stardom by including him in the ensemble cast of the movie There's No Business Like Show Business in 1954 alongside Ethel Merman as his mother, Dan Dailey as his father, Donald O'Connor as his brother, Mitzi Gaynor as his sister, and Marilyn Monroe as his sister-in-law. This was his only film other than a cameo as a police officer in Rogue's Gallery. Rogue's Gallery was intended for release to cinemas in 1968 but was withdrawn and was not seen publicly until NBC telecast it in 1972. When Johnnie Ray was questioned why he never made another film, he replied, "I was never asked."
In the 1950s, after both sides of the single "Cry"/"The Little White Cloud That Cried" ran their course, more hit songs followed. They included "Please, Mr. Sun", "Such a Night," "Walkin' My Baby Back Home," "A Sinner Am I" and "Yes Tonight Josephine." Johnnie had a United Kingdom number 1 hit with "Just Walkin' in the Rain" during the Christmas season in 1956. He hit again in 1957 with "You Don't Owe Me a Thing," which reached number 10 on the Billboard charts. Though his American popularity was declining in 1957, he remained popular in the United Kingdom, breaking the attendance record at the London Palladium formerly set by fellow Columbia Records artist Frankie Laine. In later years, he retained a loyal fan base overseas, particularly in Australia.

song: 'Just Walkin' In the Rain' by Johnnie Ray