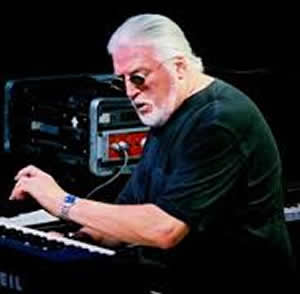 m on 16th July 2012 at The London Clinic in Devonshire Place, London W1, U.K. Jon's interment was at the fourteenth Century St. Mary the Virgin Church in Hambleden, Buckinghamshire, England.

Jon was born John Douglas Lord in Leicester on 9th June nineteen forty-one. His mother was Miriam Lord and his father; Reginald Lord. Jon grew up there and kept a strong bond with Leicester all through his life. Jon's father was an amateur saxophonist and encouraged him in music from an early age. Jon studied classical piano from the age of five, with a local teacher and a focus on classical music gave a grounding to his work, in composition, arranging and instrumental solos on piano, organ and electronic keyboards.

Jon Lord went to Wyggeston Grammar School for Boys in Leicester between 1952 and 1958. He got O Level passes in French, music and mathematics and also was active in amateur dramatics and the school choir in addition to his organ and piano studies and also worked as a clerk in a solicitor's office for two years.

Jon Lord's first marriage, lasting from nineteen sixty-nine to nineteen eighty-one , was to Judith Feldman, with whom he had one daughter named Sara. Jon's second wife was Vickie Gibbs who was also a former girlfriend of Deep Purple band-mate Glenn Hughes. Moreover she was a twin sister of band-mate Ian Paice's wife. Jon and Vickie also had a daughter who was named Amy.

Jon Lord moved to London in nineteen fifty-nine intending to pursue an acting career. He enrolled at the Central School of Speech and Drama. Minor acting jobs followed, and he continued playing the piano and organ in nightclubs and did session musician work to earn a living. Jon began a career in bands in 1960 with the jazz ensemble 'The Bill Ashton Combo'. .
Later Jon joined a band, later known as "The Artwoods", which used Jon's organ as the bluesy, rhythmic core of their sound. They made appearances on the BBC's Saturday Club radio show and on such TV programs as Ready Steady Go!.
In nineteen sixty-seven Jon founded the "Santa Barbera Machine Head" and wrote and recorded three powerful keyboard-driven instrumental tracks reminiscent of his future style in Deep Purple.
Also in 1967 Jon Lord met businessman Tony Edwards who was looking to invest in the music business. Session guitarist Ritchie Blackmore was called in and he met Jon Lord for the first time. Edwards was impressed enough by Jon Lord to ask him to form a band and Richie Blackmore was recalled from Hamburg. Richie,who had been impressed by IanPaice's drumming when he had met him earlier, set up an audition for Ian Paice as well. The band was called the "Roundabout" at first and began rehearsals in Hertfordshire.
Not bothereing with the Moog synthesizer, Jon Lord began experimenting with a keyboard sound produced by driving the Hammond organ through Marshall speakers in an effort to match the attack and volume of Richie Blackmore's guitar. This produced a rhythmic foundation to complement Richie Blackmore's speed and virtuosity on electric guitar.
Jon Lord continued to focus on his classical aspirations alongside his Deep Purple rock career. The BBC, commissioned him to write a piece resulting in "Gemini Suite" being performed by Deep Purple and the Light Music Society under Malcolm Arnold at the Royal Festival Hall in September nineteen seventy. This piece became the basis for his first solo album called Gemini Suite and released in November nineteen seventy-two.
Jon Lord's first band line-up after Deep Purple was Paice Ashton Lord which lasted only one year but created one album called 'Malice in Wonderland'. Around this period Jon also guested on albums by Maggie Bell, Nazareth and Richard Digance. Jon then joined former Deep Purple band member David Coverdale's new band, Whitesnake in August 1978. Jon Lord's last Whitesnake concert took place in the Swed

ish TV programme Måndagsbörsen on 16th April nineteen eighty-four.
In 1997, Jon created his most personal work entitled 'Pictured Within', which was released in 1998 with a tour to support it. Jon's mother had died in August 1995 and the album is a deeply affecting piece, inflected at all stages by Jon's feelings of grief.
Jon Lord played piano on his friend George Harrison's posthumously released Brainwashed album.
In July 2011, Jon Lord performed his last live concert appearance, the Sunflower Jam at the Royal Albert Hall, where he premiered his joint composition with Rick Wakeman.
Jon Lord's Concerto for Group and Orchestra was recorded in Liverpool and at Abbey Road Studios, London throughout 2011 and under post-production in 2012 with the Liverpool Philharmonic Orchestra performing. The recording was at completion at the time of Jon's death, with him having been able to review the final master recordings. An album and DVD were released in 2012.