Keith Knudsen died aged fifty-six on 8th February, 2005 from pneumonia in Kentfield, California, U.S.A. He was survived by his wife, Kate, and his daughter Dayna. 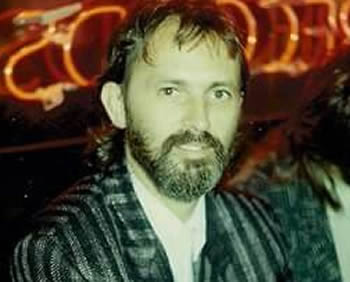 Keith was born on 18th February, 1948 in Le Mars, Iowa, U.S.A. He began drumming while attending Princeton High School in Princeton, Illinois, where he graduated in 1966. After short stints playing in a club band and the Blind Joe Mendlebaum Blues Band, he became the drummer for organist/vocalist Lee Michaels and played in The Hoodoo Rhythm Devils from late 1972 through mid 1973. He never did any formal studio recording with them, but recorded a live Texas Special on KSAN-FM in San Francisco with the Hoodoos and Johnny Winter. His big break came in 1974 when he was invited to join The Doobie Brothers, replacing the departing Michael Hossack. Keith Knudsen joined the band during the recording of the 1974 Top 10 platinum album, What Were Once Vices Are Now Habits. He made his recording debut with the Doobies on What Were Once Vices Are Now Habits in 1974, performing backing vocals over instrumental tracks that included Hossack.
Keith Knudsen did not get behind the drum kit in the recording studio until Stampede in 1975. Keith Knudsen was co-drummer with John Hartman and later Chet McCracken until the Doobies disbanded in 1982. His contribution to the group's vocal harmonies in the studio and in concert was as crucial as his drumming.
After the Doobies disbanded in 1982, Keith Knudsen and fellow Doobie John McFee formed the country rock band Southern Pacific. The group was successful in the country charts but disbanded in the early 1990s. By then the two men had formed a writing partnership and despite not rejoining the group at that time, co-wrote the song Time Is Here And Gone with Doobies' percussionist Bobby LaKind, featured on the Doobies reunion album 'Cycles' in 1989.
Keith Knudsen organized a one-off Doobies reunion in 1987 to raise funds for the National Veterans Foundation. After Southern Pacific folded, both he and John McFee rejoined the Doobie Brothers on a full-time basis in 1993. Ironically, Keith Knudsen found himself drumming alongside Michael Hossack, whom he had replaced all those years ago.
Keith featured prominently as a songwriter on the album 'Sibling Rivalry' in 2000, which was, at the time, only the band's third studio album since reuniting. He also featured on the albums Rockin' Down the Highway: The Wildlife Concert, 1996, and Live at Wolf Trap, 2004. In 2005 Keith played drums on Emmylou Harris' 'Shores Of White Sand' off her 'All I Intend To Be' album.               Though Keith Knudsen was a frequent backing vocalist for the Doobie Brothers, he did not sing lead on many released Doobies tracks. On "Double Dealin' Four Flusher" (from Stampede) he is heard trading brief lead vocal lines with Pat Simmons and Tom Johnston. The box set Long Train Runnin': 1970–2000 has an early rehearsal version of this song, called "Shuffle," with vocals only by Simmons and Keith Knudsen. .

song:'What a Fool Believes' by The Doobie Brothers