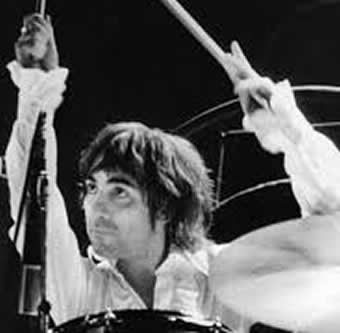 fter dining with the McCartneys at Peppermint Park in Covent Garden, Keith Moon and Walter-Lax returned to their flat. He watched a movie, 'The Abominable Dr. Phibes', and asked Annette to cook him steak and eggs. When she objected, Keith Moon replied, "If you don't like it, you can fuck off!" These were his last words. Keith Moon then took thirty-two clomethiazole tablets. When Annette checked on him the following afternoon, she discovered he was dead.
Curbishley phoned the flat at around five pm looking for Keith Moon, and Dymond gave him the news. Curbishley told Townshend, who informed the rest of the band. Entwistle was giving an interview to French journalists when he was interrupted by a phone call with the news of Keith Moon's death. Trying to tactfully and quickly end the interview, he broke down and wept when the journalist asked him about the Who's future plans.
Keith Moon's death came shortly after the release of 'Who Are You'. On the long playing record's cover, he is straddling a chair to hide his weight gain; the words "Not to be taken away" are on the back of the chair.

song: 'Happy Jack' by The Who