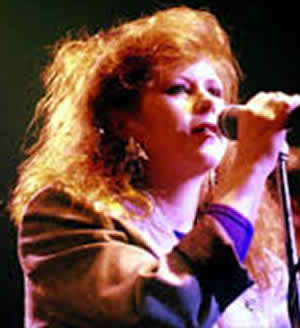 r 2000 in Cozumel, Mexico. Following her participation in the presentation of a radio programme for the BBC in Cuba, Kirsty took a holiday in Cozumel, Mexico, with her sons and her partner, musician James Knight. On 18th December 2000 she and her sons went diving at the Chankanaab reef, part of the National Marine Park of Cozumel, in a designated diving area that watercraft were restricted from entering. With the group was a local veteran divemaster, Iván Díaz. As the group were surfacing from a dive, a powerboat moving at high speed entered the restricted area. Kirsty MacColl saw the boat coming before her sons did; Louis was not in its path, but Jamie was. She was able to push him out of the way (he sustained minor head and rib injuries) but in doing so she was struck by the boat and died instantly. Kirsty MacColl's body was repatriated to the United Kingdom, and was cremated after a humanist funeral at Mortlake Crematorium in South-West London.
The powerboat involved in the accident was owned by Guillermo González Nova, multimillionaire president of the Comercial Mexicana supermarket chain, who was on board with members of his family. One of his employees, boathand José Cen Yam, stated that he was in control of the boat at the time of the incident. Eyewitnesses said that Cen Yam was not at the controls and that the boat was travelling much faster than the speed of one knot that González Nova said.
Cen Yam was found guilty of culpable homicide and was sentenced to 2 years 10 months in prison. He was allowed under Mexican law to pay a punitive fine in lieu of the prison sentence.
Kirsty MacColl's family launched the Justice for Kirsty campaign in response to the events surrounding her death.
U2 frontman Bono, who was a friend of Kirsty MacColl, spoke about the incident during a concert in Monterrey, Mexico, in February 2006. The Mexican government released a statement after the concert indicating it would take action.
In December 2009, it was announced that the 'Justice For Kirsty' campaign was being ended since "the committee was successful in achieving most of its aims" and "it is unlikely that any more could be achieved." The campaign's remaining funds were to be divided between two charities, Casa Alianza México and Cuba Music Solidarity, of which "Kirsty would have approved."

Kirsty MacColl, born 10th October 1959, was the daughter of folk singer Ewan MacColl and dancer Jean Newlove. She and her brother, Hamish MacColl, grew up with their mother in Croydon, London, United Kingdom, where Kirsty attended Park Hill Primary School, Monks Hill High School and John Newnham High School, making appearances in school plays. At the time of her birth, her father had been in a relationship with folk singer, multi-instrumentalist and songwriter Peggy Seeger since 1956 and already had a son with her.
Kirsty came to notice when Chiswick Records released an EP by local punk rock band the Drug Addix with Kirsty MacColl on backing vocals under the pseudonym Mandy Doubt.. Stiff Records executives were not impressed with the band, but liked Kirsty and subsequently signed her to a solo deal.
Her debut solo single "They Don't Know", released in 1979, peaked at number two on the Music Week airplay chart. However, a distributors' strike prevented copies of the single getting into record stores, and the single consequently failed to appear on the UK Singles Chart.
Kirsty MacColl recorded a follow-up single, "You Caught Me Out", but felt she lacked Stiff's full backing, and left the label shortly before the song was to be released. The single was pulled, and only a few "white label" promotion copies of the single probably now exist.
Kirsty MacColl moved to Polydor Records in 1981. She had a UK number fourteen hit with "There's a Guy Works Down the Chip Shop Swears He's Elvis", taken from her critically acclaimed debut album 'Desperate Character'. In 1983, Polydor dropped her just as she had completed recording the songs for a planned second album which used more synthesizers and had new wave-styled tracks. She returned to Stiff, where pop singles such as "Terry" and "He's On the Beach" were unsuccessful but a cover of Billy Bragg's "A New England" in 1985 got to number seven in the UK charts. This included two extra verses specially written for her by Billy Bragg. Also around this time, Kirsty MacColl wrote and performed the theme song "London Girls" for Channel 4's short-lived sitcom Dream Stuffing.
In the U.S.A. Kirsty MacColl was most known as the writer of "They Don't Know". Tracey Ullman's version reached number two in the UK in 1983 and number eight in the United States in early 1984. Kirsty MacColl also sang back-up on the track, providing the "Baay-byy" because it was too high a pitch for Ullman. It was played over the closing credits of Ullman's HBO show 'Tracey Takes On'... in 1996. Ullman also recorded three more of Kirsty MacColl's songs, "You Broke My Heart In 17 Places" and "You Caught Me Out", as the title tracks of her first and second albums respectively, and "Terry" which was released as a single in 1985.
When Stiff Records went bankrupt in 1986, Kirsty MacColl was left unable to record in her own right, as no record company bought her contract from the Official Receiver. However, she had regular session work as a backing vocalist, and she frequently sang on records produced or engineered by her husband, Steve Lillywhite, including tracks for Robert Plant, The Smiths, Alison Moyet, Shriekback, Simple Minds, Talking Heads, Big Country, Anni-Frid Lyngstad (of ABBA), and The Wonder Stuff among others. She appeared in the videos "Welcome to the Cheap Seats" for The Wonder Stuff and "(Nothing But) Flowers" for Talking Heads (along with ex-The Smiths guitarist Johnny Marr). Kirsty MacColl also set the track sequencing for U2's acclaimed breakthrough album "The Joshua Tree".
Kirsty MacColl re-emerged in the British charts in December 1987, reaching Number two with The Pogues on "Fairytale of New York", a duet with Shane MacGowan. This led to her accompanying The Pogues on their British and European tour in 1988, an experience which she said helped her temporarily overcome her stage fright. In March 1989, Kirsty MacColl sang backing vocals on the Happy Mondays' Hallelujah EP.
After a time-wasting contract issue was resolved, Kirsty MacColl returned to recording as a solo artist and received critical acclaim upon the release of 'Kite' in 1989. The album was widely praised by critics, and featured collaborations with David Gilmour and Johnny Marr. Kirsty MacColl's lyrics addressed life in Margaret Thatcher's Britain on "Free World", ridiculed the vapidity of fame in "Fifteen Minutes", and addressed the vagaries of love in "Don't Come The Cowboy With Me Sonny Jim!" Although 'Kite' contained many original compositions, Kirsty MacColl's biggest chart success from the album was the cover of The Kinks' song "Days", which gave her a UK Top twenty hit in July 1989. A bonus track on the CD version of Kite was a cover of the Smiths song "You Just Haven't Earned It Yet, Baby".
During this time, Kirsty MacColl was also featured on the British sketch comedy French and Saunders, appearing as herself, singing songs including "15 Minutes" and "Don't Come The Cowboy With Me Sunny Jim!", "Still Life", "Girls On Bikes" and, with comedy duo Raw Sex, the Frank and Nancy Sinatra hit "Somethin' Stupid". She continued to write and record, releasing the album Electric Landlady, a play on the Jimi Hendrix album title Electric Ladyland, including her most successful chart hit in North America, "Walking Down Madison", in 1991.
Kirsty released 'Titanic Days', inspired by her failing marriage with Lillywhite, in 1993, but ZTT Records had agreed only to release the album as a "one-off" and declined to sign her to a contract. In 1995, she released two new singles on Virgin, "Caroline" and a cover of Lou Ree

d's "Perfect Day", together with the "best of" compilation 'Galore'.
'Galore' became Kirsty MacColl's only album to reach the top ten in the UK Albums Chart, but neither of the new singles, nor a re-released "Days", made the Top forty. Kirsty MacColl did not record again for several years; her frustration with the music business was exacerbated by a lengthy case of writer's block. Kirsty MacColl herself admitted that she was ready to give up her music career and become an English teacher in South America.
In 1998, the album 'What Do Pretty Girls Do?' was released, containing BBC Radio 1 live sessions (featuring Billy Bragg on two songs) that were broadcast between 1989 and 1995.
After several trips to Cuba and Brazil, Kirsty MacColl recorded the world music-inspired (particularly Cuban and other Latin American forms) 'Tropical Brainstorm', which was released in 2000 to critical acclaim. It included the song "In These Shoes?", which garnered airplay in the U.S.A, was covered by Bette Midler and featured in the HBO show Sex and the City. After Kirsty MacColl's death it was adopted by Catherine Tate as the theme tune for her BBC TV show and featured on the soundtrack to British film Kinky Boots.
Kirsty MacColl featured regularly in the third series of the French and Saunders Show, a comedy show on the BBC. Unlike other guests on the show, she was not part of any of the sketches but sang her songs whilst performing as in a music video. She also made regular appearances on Jools Holland's TV shows, also on the BBC, singing during the 1995 Hootenanny a rendition of "Miss Otis Regrets" with the Pipes and Drums of the Irish Guards.
Kirsty MacColl appeared in the 1991 Channel 4 historic musical fantasy The Ghosts of Oxford Street as Kitty Fisher, performing "Fairytale of New York" opposite Shane MacGowan as the Duke of York.