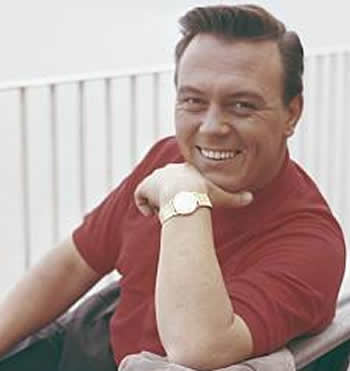 Cromwell Hospital, Kensington, London. He was survived by his widow, Mickie, and three children: Mitchell, Michele, and Matthew. Matt was cremated at Golders Green Crematorium in London, UK.
In recent years, Michael Bublé and Rick Astley have both cited Matt Monro as a strong influence. He continues to feature prominently on radio stations and CD compilations featuring popular easy-listening vocalists.
His daughter Michele has written a biography, The Singer's Singer: The Life and Music of Matt Monro and has been instrumental, along with sound engineer Richard Moore, in releasing rare and unreleased material by Matt Monro in recent years.
Matt Monro was born Terence Edward Parsons in Shoreditch, London and attended school in Islington, and Putney. His singing was first noticed while serving in the British armed forces in Hong Kong.
A regular guest (and frequent winner) of Radio Rediffusion's Talent Time show, he was invited by then-host Ray Cordeiro to perform in his own one-off show, on the condition that he would bow out of future Talent Time episodes to make way for others. Agreeing to the deal, he performed his first on-air concert for Rediffusion on June 27, 1953.
By 1956, Matt Monro had become a featured vocalist with the BBC Show Band. An important influence on his early career was the pianist Winifred Atwell, who became his mentor, provided him with his stage name, and helped him sign with Decca Records.
In 1957 Matt Monro released Blue and Sentimental, a collection of standard songs. Despite the album's critical acclaim, Matt Monro languished among the numerous young male singers trying to break through at the end of the 1950s, many of them emulating Frankie Vaughan by recording cover versions of American hits. A short recording contract with Fontana Records followed.
By the end of the 1950s, Matt Monro's mid-decade fame had evaporated, and he returned to relative obscurity. He and his wife Mickie lived from her wages as a song plugger and his royalties from a TV advertising jingle for Camay soap. In 1959 he recorded a country pastiche song, "Bound for Texas", for The Chaplin Revue, a feature-length compilation of Charlie Chaplin shorts. It would be the first of many Monro soundtrack themes.
Prior to producing the Peter Sellers album Songs for Swingin' Sellers in 1960, George Martin asked Matt Monro to record a satirical ditty to help the comedian imitate the song with a Frank Sinatra-type styling. When Sellers heard the recording he decided to use it to open the record rather than record his own version. However, Sellers billed Monro as "Fred Flange," and though it was a demoralising experience at the time, the incident developed into a lifelong friendship with Martin, who subsequently asked Matt Monro to begin recording with him for EMI's Parlophone record label. Their second single and Matt's highest UK chart success, "Portrait of My Love", written by Cyril Ornadel and Norman Newell OBE reached number three in the UK Singles Chart.
By the following year, Matt had been named Top International Act by Billboard. In February 1961, the British music magazine, NME reported that Matt Monro had won ITV's A Song for Britain with "My Kind of Girl". His follow-up hits included that song, plus "Softly as I Leave You" in1962 and the song from the James Bond film From Russia with Love in 1963.
At the 1964 Eurovision Song Contest, singing "I Love the Little Things," Matt Monro finished second behind Italy's 16-year-old Gigliola Cinquetti, despite an "excellent performance of the only English language song of the night." The Austrian entry "Warum nur warum?", performed by songwriter Udo Jürgens, caught Matts's ear, despite its sixth-place finish, and he recorded an English version titled "Walk Away" with lyric by his manager Don Black, earning him another hit single late in 1964. He also had a hit with the Beatles' "Yesterday" in 1965, releasing the first single of the most recorded song of all time.
The following year, Matt Monro sang the Oscar-winning title song for the film, Born Free, which became his signature tune. It was also his second collaboration with John Barry, following From Russia With Love. Matt went on to record two further songs from Barry film scores: "Wednesday's Child", from the film The Quiller Memorandum, and "This Way Mary", from Mary, Queen of Scots. Both Born Free and "On Days Like These", from the film The Italian Job, had lyrics by Don Black.
In the late 1960s he recorded another Udo Jürgens song with the name Was Ich Dir Sagen Will. It was adapted to English as The Music Played. Matt recorded a Spanish version of the song with adapted title of Alguien Canto. The Spanish version was a top sales hit (Superventas) in Spain in 1969. Additionally, Matt recorded an English version of Jürgens' 1966 Eurovision winner Merci, Chérie, but it failed to chart when released as a UK single.
On 31st December 1976, Matt Monro performed Don Black's "Walk Away" on BBC1's A Jubilee of Music, celebrating British pop music for Queen Elizabeth's impending Silver Jubilee.
Matt Monro achieved fame in the United States when "My Kind of Girl" in 1961 and "Walk Away" in 1964 hit the Top 40. In 1966, following the death of Nat King Cole, EMI moved Matt Monro from Parlophone to Capitol. After relocating to California and recording several albums with American arrangers, Matt Monro returned to the UK and began appearing on EMI's Columbia label, his final U.S. album release being Close To You in 1970. This LP contained "We're Go

nna Change The World", a semi-satirical song about women's liberation, which was not a hit in either the US or the UK but was nevertheless widely played, and became enduringly popular on BBC Radio 2.
He continued touring and recording until just before his death, releasing a single and promoting it throughout the UK and Australia in 1984.
<<go to top>>

song:'Gone With The Wind' by Matt Munro