Minnie Riperton died aged thirty-one on twelfth July, 1979 in Cedars-Sinai Medical Center in Los Angeles, California, U.S.A. and was survived by her 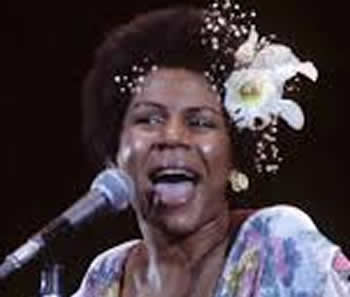 husband, Richard and their son, Marc and their daughter, Maya.
Minnie had undergone a mastectomy due to breast cancer and, at the time of her diagnosis, she found out her cancer had already spread to the lymphatic system, and was given about six months to live. However, She continued touring in 1977 and 1978, and became the national spokeswoman for the American Cancer Society's 1978–79 campaign. Minnie was interred in the Westwood Village Memorial Park Cemetery in Los Angeles where her epitaph is the opening line of her most famous song: "Lovin' you is easy 'cause you're beautiful."
Minnie was born Minnie Julia Riperton in Chicago, Illinois, U.S.A. on 8th November, 1947 and was the youngest of eight children in a musical family. Although she began with ballet and modern dance, her parents recognized her vocal and musical abilities and encouraged her to pursue music and voice and at Chicago's Lincoln Center, she received operatic vocal training but the young Minnie was, however, becoming interested in soul, rhythm and blues, and rock music.
Minnie Riperton's first professional singing engagement was with The Gems, when she was fifteen. The Gems had relatively limited commercial success, but proved to be a good outlet for Minnie Riperton's talent. Eventually the group became a session group known as 'Studio Three' and it was during this period that they provided the backing vocals on the classic 1965 Fontella Bass hit "Rescue Me". In 1964, The Gems released a local hit, 'I Can't Help Myself', and their last single, 'He Makes Me Feel So Good', was released in 1965.
While a part of Studio Three, Minnie Riperton met her mentor, producer Billy Davis, who wrote her first local hit, "Lonely Girl", as well as "You Gave Me Soul" and in honor of him she used the pseudonym Andrea Davis for the release of those two singles. Some months after her Andrea Davis singles got on radio, Minnie Riperton joined Rotary Connection, a funky rock-soul group creation of Marshall Chess, the son of Chess Records founder Leonard Chess. Rotary Connection consisted of Minnie Riperton, Leonard Chess, Judy Hauff, Sidney Barnes, and Charles Stepney. They released their debut in 1967 and, eventually, five more albums: 1968's Aladdin; the Christmas album Peace; Songs; and finally 1970's Dinner Music and Hey Love. In 1969 Minnie Riperton, along with Rotary Connection, played in the first Catholic Rock Mass at the Liturgical Conference National Convention, Milwaukee Arena, Milwaukee, Wisconsin, U.S.A.
Minnie Riperton's debut solo album entitled 'Come to My Garden' was produced, arranged, as well as orchestrated by Charles Stepney and released in 1970 by GRT Records. Although commercially unsuccessful, 'Come to My Garden' is now considered a masterpiece by music critics and many others in the music industry.
In 1973, Minnie Riperton signed with Epic Records, and the family moved to Los Angeles, California. The subsequent record, 'Perfect Angel', turned out to be one of Minnie's best-selling albums. Included were the rock-soul anthem "Reasons"; the second single, "Take a Little Trip" (written by Stevie Wonder, who also coproduced the album). With the fourth single, "Lovin' You", the album caught on, and in April 1975, the song went to the top of the charts in the U.S. and 24 other countries. The song reached no. 2 in the UK Singles Chart, and number three on the U.S. R&B charts. It sold more than one million copies, and was awarded a gold disc by the RIAA in April 1975. The album also featured the song "Every Time He Comes Around", with Deniece Williams singing the background vocals. Minnie Riperton's daughter, Maya, was a child when "Lovin' You" was recorded and ccording to the liner notes from Minnie Riperton's Petals compilation CD, the melody to "Lovin' You" was created as a distraction for Maya when she was a baby.
After Perfect Angel, Minnie started on her third album, 'Adventures in Paradise' released in 1975.
Minnie's fourth album for Epic Records, titled 'Stay in Love', featured another collaboration with Stevie Wonder in the funky disco tune "Stick Together". She also sang backup on Stevie's songs "Creepin" and "Ordinary Pain" from 1976's Songs in the Key of Life. In 1977, Minnie Riperton lent her vocal abilities to a track named, "Yesterday and Karma", on Osamu Kitajima's album, "Osamu". In 1978, Minnie Riperton's attorney Mike Rosenfeld and her husband, Richard, orchestrated a move to Capitol Records for Minnie and her CBS Records catalog. In April 1979, Minnie Riperto

n released her fifth and final album, 'Minnie'. During the recording of the album, her cancer progressed to the point that she was in a great deal of pain. "Memory Lane" was a hit from the album.

Do you like this website? If so, then please copy and email the link:   http://www.rockapaedia.com
to your friends and colleagues and aquaintances.
Thankyou

song:'Lovin' You' by Minnie Ripperton