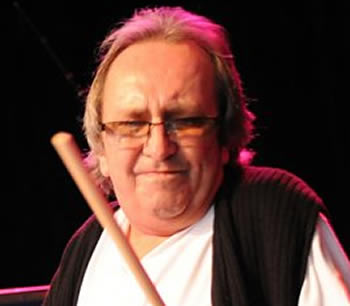 room at the Benson Hotel in Portland, Oregan, U.S.A. Mitch had been in ill health for many years due to alcohol-related problems. He was the last surviving member of the original Jimi Hendrix Experience. Mitch had planned to leave Portland that day to return to his home in England. He was buried in Seattle. He is survived by his wife, Dee, a daughter and two grandchildren.
He spent his final days celebrating Jimi Hendrix's music on the 2008 Experience Hendrix Tour. For nearly four weeks the tour travelled on an eighteen-city tour of the USA finishing in Portland, Oregon.
Mitch Mitchell was born in Ealing, Middlesex, U.K. on 9th July 1946. As a teenager, he starred in a children's television programme, Jennings at School, and starred in a leading role in the 1960 British film Bottoms Up with Jimmy Edwards. Mitch Mitchell became a musician through working at Jim Marshall's drum shop on Saturdays while still at school. One of his first bands was the Soul Messengers. Early in his career, he gained considerable musical experience as a touring and session musician, working with Pete Nelson and the Travellers, Frankie Reid and the Casuals, Johnny Harris and the Shades, the Pretty Things, Bill Knight & the Sceptres, the Riot Squad, and the Who as a session drummer while they were in the process of replacing Doug Sandom with Keith Moon. In 1965, he also replaced temporarily Viv Prince as drummer in the Pretty Things.
From December 1965 until October 1966, Mitch Mitchell was the drummer of Georgie Fame and the Blue Flames, appearing on their 1966 album, Sweet Things.
Mitch Mitchell auditioned for Hendrix's band in October 1966, edging out drummer Aynsley Dunbar on the flip of a coin. Mitch Mitchell's fast, driving, jazz influenced playing meshed well with Hendrix's open-ended, revolutionary approach to the electric guitar.
Mitch Mitchell came from a jazz background, and like many of his contemporaries in the London scene, was influenced by Elvin Jones, Max Roach, and Joe Morello. He played in Hendrix's Experience trio from October 1966 to mid-1969. In December 1968, Mitch Mitchell played with the Dirty Mac, an all-star band assembled for The Rolling Stones Rock and Roll Circus. Others included John Lennon as vocalist and rhythm guitarist "Winston Leg-Thigh"; Yoko Ono providing improvised primal screams; Eric Clapton as guitarist, and Keith Richards as bassist. The group recorded a cover of "Yer Blues" as well as a jam called "Whole Lotta Yoko". While working with Jimi Hendrix from late 1969 until early 1970.
After Jimi Hendrix's death, Mitch Mitchell finished production work with engineer Eddie Kramer on incomplete Hendrix recordings, resulting in the releases The Cry of Love and Rainbow Bridge. In 1972, he teamed up with guitarists Mike Pinera and April Lawton to form Ramatam. They recorded the first of Ramatam's two albums and were an opening act for Emerson, Lake & Palmer at a number of concerts. Ramatam never achieved commercial success and Mitch Mitchell left the act before their second album was released. Mitch Mitchell also performed in concerts with Terry Reid, Jack Bruce, and Jeff Beck as a substitute for drummer Cozy Powell. Mitch Mitchell drummed alongside John Halsey in the 1970s jam band, "Hinkleys Heroes", the only time he played alongside another drummer.
For the rest of the 1970s through to the 1990s, Mi

tch Mitchell, semi-retired and living in Europe, continued to perform and occasivarious Hendrix-related recordings, videos, and onally record. In 1986, Mitch Mitchell teamed up with jazz musician Greg Parker and made a music video session of Led Zeppelin's Black Dog. He did session work on Junior Brown's Long Walk Back album and participated in interviews. In 1999, Mitch Mitchell was part of the Gypsy Sun Experience, along with former Hendrix bassist Billy Cox and guitarist Gary Serkin. He also appeared on Bruce Cameron's album Midnight Daydream that included Billy Cox, Buddy Miles and Jack Bruce.