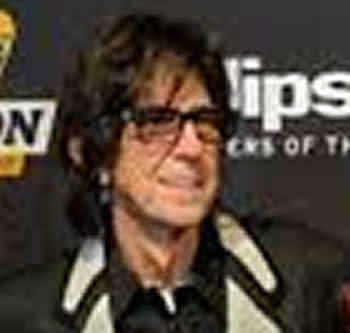 , U.S.A. on 15th September, 2019, where he had been recovering from surgery. The Chief Medical Examiner office reported that Ric had died from natural causes. He had been suffering from both hypertensive and atherosclerotic cardiovascular diseases.
Ric Ocasek was born on 23rd of March, 1944 and grew up in Baltimore, Maryland, U.S.A. When he was sixteen years old, his family moved to Cleveland, Ohio, where his father worked as a systems analyst with NASA at the Lewis Research Center. Ric graduated from Maple Heights High School in 1963 and briefly attended Antioch College and Bowling Green State University, but dropped out to pursue his career in music.
Ric Ocasek met future Cars bassist Benjamin Orr in Cleveland, Ohio in 1965 after Ric saw Benjamin performing with his band the Grasshoppers on the Big 5 Show, a local musical variety program. He reconnected with Benjamin a few years later in Columbus, Ohio, and the two began booking bands together. They formed a band called ID Nirvana in 1968 and performed in and around Ohio State University.

Ric Ocasek was married three times. His first wife Constance divorced him in Ohio in 1971. In the same year he married Suzanne Otcasek, who uses the original spelling of Ric Ocasek's name. They were married for 17 years. During filming of the music video for the Cars' song "Drive" in 1984, Ric Ocasek met eighteen-year-old supermodel Paulina Porizkova, while he was still married to Suzanne and he and Suzanne divorced in 1988. Ric and Paulina were married on 23rd August 1989 on Saint-Barthélemy island in the Caribbean. In May 2018, Paulina announced that herself and Ric had separated a year earlier.
Ric Ocasek had six sons, two from each of his three marriages. His eldest son, Christopher, is a singer who formed the rock group Glamour Camp which released one album in 1989, and appeared as a solo artist in the film Pretty Woman in 1990. His other children include Adam, Eron, Derek, Jonathan Raven and Oliver .
Ric and Cars co-founder Benjamin Orr were close friends who became estranged when the band broke up. Their friendship was commemorated in the song "Silver", which Ric Ocasek wrote as a dedication to Orr upon his death in the year 2000.
Ric Ocasek and Orr were in various bands in Columbus and Ann Arbor, Michigan, before relocating to Boston in the early 1970s. In Boston, they formed a Crosby, Stills and Nash-style folk rock band called Milkwood. They released one album, How's the Weather, on Paramount Records in early 1973 but it failed to chart. Future Cars keyboardist Greg Hawkes played on Milkwood's album. After Milkwood, Ric Ocasek formed the group Richard and the Rabbits, which included Orr and Hawkes. Ric Ocasek and Orr also performed as an acoustic duo during this period. Some of the songs they played became the early Cars songs. Later, Ric Ocasek and Orr teamed up with guitarist Elliot Easton in the band Cap'n Swing. Cap'n Swing soon came to the attention of WBCN disc jockey Maxanne Sartori, who began playing songs from their demo tape on her show. After Cap'n Swing was rejected by several record labels, Ric Ocasek got rid of the bass player and drummer and decided to form a band that would better fit his style of writing. Benjamin took over on bass and David Robinson, best known for his career with the Modern Lovers, became the drummer. Hawkes returned to play keyboards and the band became "the Cars" in late 1976.
Ric Ocasek was a founding member of the Cars, recording numerous hit songs from 1978 to 1988. He played rhythm guitar and sang lead vocals for a majority of songs (bassist Benjamin Orr was lead vocalist on the remaining tracks). After splitting writing duty with Orr in the 1970s, Ric Ocasek became the principal songwriter of the band, and wrote nearly all of the Cars' material, sharing credit on only a few songs with bandmate Greg Hawkes as co-writer. In 2010, Ric Ocasek reunited with the surviving original members of the Cars to record their first album in 24 years, titled Move Like This, which was released on 10th May 2011.
During his time with the Cars, Ric Ocasek developed a reputation as a producer, and took this role for many up-and-coming bands of differing genres including Bad Brains' Rock for Light and Guided by Voices' Do the Collapse. His other production credits include Weezer's Blue Album and Green Album (both multi-platinum), Suicide, Romeo Void, Hole, Bebe Buell, No Doubt, Nada Surf, Irish folk-punk band Black 47, Bad Religion, Johnny Bravo, D Generation, the Wannadies, Possum Dixon, Martin Rev, Jonathan Richman, and the 2006 album by the Pink Spiders titled Teenage Graffiti. He also produced a portion of the third Motion City Soundtrack album, Even If It Kills Me. In 2014, Ric Ocasek produced Everything Will Be Alright in the End, the ninth studio album by Weezer and his third collaboration with the band, and For All My Sisters, the sixth album by the Cribs.
Ric released his first solo album in 1982. Beatitude is a somewhat more experimental variation of the Cars' new wave rock sound. On some tracks Ric Ocasek played all of the instruments. Greg Hawkes also played on the album. A more synthesizer-heavy follow up, This Side of Paradise, was released in 1986. This album featured Hawkes, Elliot Easton and Ben Orr. A No. 15 hit single, "Emotion in Motion," accompanied the album.
The Cars disbanded in 1988, and Ric Ocasek disappeared from the public eye for a couple of years. He resurfaced in 1990 with his own album, Fireball Zone. One track, "Rockaway," enjoyed a brief stay on the charts, but his solo albums realized disappointing sales, especially compared to his success with the Cars. He subsequently released other solo works throughout the decade, including 1993's Quick Change World, 1996's Getchertiktz (a collaboration with Suicide's Alan Vega and Canadian poet Gillian McCain comprising only Beat poetry set to music, sound effects, etc.), and 1997's Billy Corgan-produced Troublizing, which Ric Ocasek supported with a very brief tour, his first since leaving the Cars). In 2005 Ric Ocasek released another album, Nexterday, to little fanfare, but it received positive reviews.
Recordings by Ric Ocasek were reportedly among thousands of tapes destroyed in the 2008 Universal fire.
Ric Ocasek wrote a book of poetry in 1993 titled Negative Theatre. It was at one time expected to be incorporated into an album and multimedia incarnation of the same name, but those plans were dropped abruptly. For many years Ric Ocasek had a hobby of making drawings, photo collages, and mixed-media art works which, in 2009, were shown at a gallery in Columbus, Ohio as an exhibit called "Teahead Scraps".
Ric Ocasek had a cameo role as a beatnik painter in the John Waters film Hairspray , and had a sm

all part in the movie Made in Heaven ] in which he played a mechanic.
Ric Ocasek stated in a 2005 interview in Rockline that he hated touring and was unlikely to do so again. He also stated he would not be reuniting with the Cars again, but gave the okay to his former bandmates to do so, with Todd Rundgren replacing him on vocals, using the name the New Cars.
In April 2006, Ric Ocasek appeared on The Colbert Report and volunteered to put Todd Rundgren "on notice". He appeared again on the 26th July 2006, episode to cheers from the audience as he volunteered to lead a commando mission to "rescue" Stephen Jr., the baby eagle at the San Francisco Zoo named after Stephen Colbert. He also appeared again on 18th April 2007, in order to support his wife during her appearance on the show, after remarks that she found Colbert "extremely attractive". He has been mentioned many times in other episodes as well. The Cars, with Ric Ocasek, appeared on The Colbert Report on August 9, 2011, to promote their new album, Move Like This.
In 2012, Ric Ocasek released Lyrics and Prose, a complete collection of lyrics from his solo and Cars' albums. The book also contains prose and poetry never set to music, as well as previously unpublished photographs and artwork.

song: 'The Next Right Moment' by Ric Ocasek