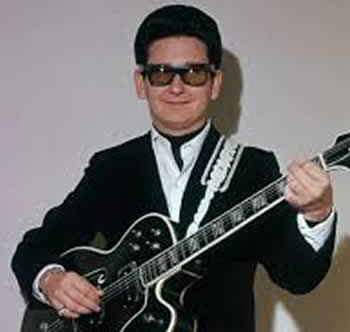 luxe edition of 'Mystery Girl'. The song was originally recorded on a stereo cassette player around 1986. Roy Orbison's sons contributed instrumentation on the track along with Roy's vocals; it was produced by John Carter Cash.
Although the video for the Wilburys' "Handle with Care" was filmed with Roy Orbison, the video for "End of the Line" was filmed and released posthumously. During Roy Orbison's vocal parts in "End of the Line", the video shows a guitar in a rocking chair, next to Roy's framed photo.
Roy Orbison determinedly pursued his second chance at stardom, but he expressed amazement at his success. He said that it's very nice to be wanted again, but he still could'nt quite believe it. Roy lost some weight to fit his new image and the constant demand of touring, as well as the newer demands of making videos. In the final three months of his life he gave "Rolling Stone" magazine extensive access to his daily activities; he intended to write an autobiography and wanted Martin Sheen to play him in a biopic. In November 1988, 'Mystery Girl' was completed, and Traveling Wilburys Vol. 1 was rising up the charts. Around this time, Roy Orbison confided in Johnny Cash that he was having chest pains and said he would have to do something about his health, but he never did. He went to Europe, was presented with an award there, and played a show in Antwerp, where footage for the video for "You Got It" was filmed. He gave several interviews a day in a hectic schedule. A few days later, a manager at a club in Boston was concerned that he looked ill, but Roy Orbison played the show, to another standing ovation.