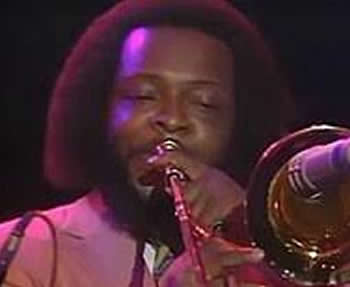 Edward Satterfield was born on 3rd April, 1937 in Shaw, Mississippi, U.S.A. in the Mississippi Delta region.
In late 1950s–early 1960s, Louis Satterfield, Charles Handy on trumpet, and Don Myrick on alto saxophone formed The Jazzmen, a student jazz trio at Crane Junior College in Chicago, Illinois. They were joined by Fred Humphrey on piano, Ernest McCarthy on bass guitar, and Maurice White on drums. Louis Satterfield as a session bassist, White, and Handy were studio musicians at Chess Records in Chicago. One of Louis Satterfield's most memorable contributions was the bassline to Fontella Bass's "Rescue Me" hit 45 rpm single. The Jazzmen collaborations and live concerts with Philip Cohran and the Artistic Heritage Ensemble at the Affro Arts Theater on the south side of Chicago went on to form The Pharaohs. In 1971 the band recorded its first and only studio album The Awakening, and in 1972 In the Basement, an album reissued by Luv N' Haight in November 1996 that features four tracks recorded live at High Chaparral in Chicago, a track from the original master tapes for The Awakening album, and "Love and Happiness", which was the B-side of "Freedom Road" single for Scarab Records.
The inception of the Phenix Horns, the main horn section for Earth, Wind & Fire and Phil Collins, originally known as the EWF Horns, came about through a pair of connections centered around Louis Satterfield. White's brother Verdine soon joined the fledgling group on bass, and Maurice expanded the band's timbral palette to include horns. Louis Satterfield's bandmates from The Pharaohs, saxophonist Don Myrick and trumpeter Rahmlee Michael Davis, joined the group, along with lead trumpet player Michael Harris, and featured flautist and sax player Ronnie Laws. Verdine White and Louis Louis Satterfield wrote a book, Playing the Bass Guitar, first published by Almo in 1978.
1979 saw the arrival and almost immediate departure of third trumpet Elmar Brown for the recording of the album I Am. In 1981, the foursome joined Genesis drummer Phil Collins and producer Hugh Padgham in the studio for the recording of Phil Collins's debut solo album, 'Face Value'. Five of the musically diverse album's 12 tracks featured horns, with a sixth, a rendition of the Beatles' "Tomorrow Never Knows", featuring electronically manipulated samples of the section. The group's extreme precision was put to good use in up-tempo numbers like "Behind the Lines" and the mostly instrumental "Hand in Hand". The section also joined Phil Collins's band Genesis on the song "No Reply at All" on their album Abacab, as well as on "Paperlate", a song from the band's EP 3X3, which was also included on the U.S. release of the album 'Three Sides Live'.
The foursome developed a strong kinship with Phil Collins and elected to join him on tour and for the recording of subsequent albums, while still performing and recording with EWF intermittently. Early concert footage shows the section doing considerably more than playing their instruments by singing and playing percussion on virtually every song that does not feature horns. During the extended intro to "Hand in Hand", the foursome join Phil Collins at the front of the stage for a vocal call and response. Louis Satterfield played baritone saxophone to brighten the section's sound for certain parts. Following the 1985–1986 tour, Michael Harris departed the group and was replaced by Harry Kim, and the horn section saw a diminished role in Collin's live show. Following the 1990 live album and video Serious Hits... Live! Don Myrick also departed, largely due to continued

struggles with drug addiction. Myrick was shot to death by a Santa Monica Police Department officer in the doorway of his home in 1993. He was replaced by erstwhile EWF co-saxophonist Andrew Woolfolk. By the time of the recording of 1996's Dance into the Light, the Phenix Horns had dissolved. They were replaced by the Vine Street Horns, featuring Phenix Horns replacements Woolfolk and Harry Kim along with 2nd trumpet Daniel Fornero, and trombonist Arturo Velasco.
Louis Satterfield returned to performing until his death.