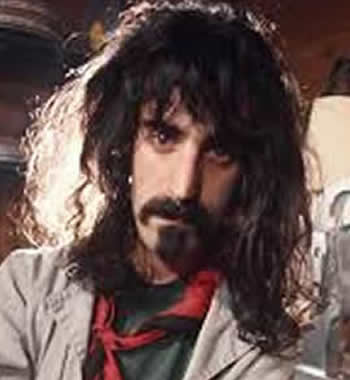 r on 4th December 1993 at his home with his wife and children by his side. At a private ceremony the following day, his body was buried in a grave at the Westwood Village Memorial Park Cemetery, in Los Angeles, California, U.S.A.. The grave is unmarked. On December 6th his family publicly announced that "Composer Frank Zappa left for his final tour just before 6:00 pm on Saturday".
Frank Zappa was born on December 21st 1940 in Baltimore, Maryland, U.S.A. His mother, Rosemarie (nee Collimore) was of Italian (more specifically, her family was from Naples and Sicily) and French ancestry; his father, whose name was Anglicized to Francis Vincent Zappa, was an immigrant from Partinico, Sicily, with Greek and Arab ancestry. It is not clear whether Frank possessed other than Italian roots as all of his grandparents and great-grandparents were born in Italy.
Frank, the eldest of four children, was raised in an Italian-American househ old where Italian was often spoken by his grandparents.. The family moved often because his father, a chemist and mathematician, worked in the defense industry. After a time in Florida in the 1940's, the family returned to Maryland. Due to their home's proximity to the arsenal, which stored mustard gas, gas masks were kept in the home in case of an accident. This had a profound effect on Frank Zappa, and references to germs, germ warfare and the defense industry occur throughout his work.
Frank Zappa was often sick as a child, suffering from asthma, earaches and sinus problems. A doctor treated his sinusitis by inserting a pellet of radium into each of Frank's nostrils. At the time, little was known about the potential dangers of even small amounts of therapeutic radiation.
Nasal imagery and references appear in his music and lyrics, as well as in the collage album covers created by his long-time collaborator Cal Schenkel. Frank Zappa believed his childhood diseases might have been due to exposure to mustard gas, released by the nearby chemical warfare facility. His health worsened when he lived in Baltimore. In 1952, his family relocated for reasons of health. They next moved to Monterey, California, where his father taught metallurgy at the Naval Postgraduate School. They soon moved to Claremont, California, then to El Cajon, before finally settling in San Diego.
Frank Zappa joined his first band at Mission Bay High School in San Diego as the drummer. About the same time his parents bought a phonograph, which allowed him to develop his interest in music, and to begin building his record collection. R&B singles were early purchases, starting a large collection he kept for the rest of his life. He was interested in sounds for their own sake, particularly the sounds of drums and other percussion instruments. By age twelve he had obtained a snare drum and began learning the basics of orchestral percussion. Frank Zappa's deep interest in modern classical music began when he read a LOOK magazine article about the Sam Goody record store chain that lauded its ability to sell an LP as obscure as The Complete Works of Edgard Varèse, Volume One. The article described Varèse's percussion composition Ionisation, produced by EMS Recordings, as "a weird jumble of drums and other unpleasant sounds". Zappa decided to seek out Varèse's music. After searching for over a year, Frank Zappa found a copy (he noticed the LP because of the "mad scientist" looking photo of Varèse on the cover). Not having enough money with him, he persuaded the salesman to sell him the record at a discount. Thus began his lifelong passion for Varèse's music and that of other modern classical composers.

unnoticed for ten years and was considered inoperable. After the diagnosis, Frank Zappa devoted most of his energy to modern orchestral and Synclavier works. Shortly before his death in 1993 he completed 'Civilization Phaze III', a major Synclavier work which he had begun in the 1980s.
In 1991, Frank Zappa was chosen to be one of four featured composers at the Frankfurt Festival in 1992 (the others were John Cage, Karlheinz Stockhausen, and Alexander Knaifel). Frank Zappa was approached by the German chamber ensemble Ensemble Modern which was interested in playing his music for the event. Although ill, he invited them to Los Angeles for rehearsals of new compositions and new arrangements of older material. Frank Zappa also got along with the musicians, and the concerts in Germany and Austria were set up for later in the year. Frank Zappa also performed in 1991 in Prague, claiming that "was the first time that he had a reason to play his guitar in three years", and that that moment was just "the beginning of a new country", and asked the public to "try to keep your country unique, do not change it into something else".
In September 1992, the concerts went ahead as scheduled but Frank Zappa could only appear at two in Frankfurt due to illness. At the first concert, he conducted the opening "Overture", and the final "G-Spot Tornado" as well as the theatrical "Food Gathering in Post-Industrial America, 1992" and "Welcome to the United States" (the remainder of the program was conducted by the ensemble's regular conductor Peter Rundel). Frank Zappa received a twenty-minute ovation. G-Spot Tornado was performed with Canadian dancer Louise Lecavalier. It was his last professional public appearance as the cancer was spreading to such an extent that he was in too much pain to enjoy an event that he otherwise found "exhilarating" Recordings from the concerts appeared on 'The Yellow Shark', Frank Zappa's last release during his lifetime, and some material from studio rehearsals appeared on the posthumous 'Everything Is Healing Nicely' .