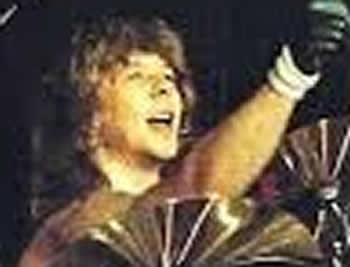 Sclerosis on 12th March 2013 in London, United Kingdom. He was survived by his partner, Mimi. A funeral service was held for Clive on 25th March 2013 in London.
Clive was born Clive Ronald Burr on 8th March 1957 in East Ham, London, United Kingdom. Auditioning and joining Iron Maiden upon the recommendation of then-Iron Maiden guitarist Dennis Stratton, Clive Burr played on their first three albums: 'Iron Maiden', 'Killers' and their breakthrough release 'The Number of the Beast'. Clive Burr was fired from the band in 1982 during The Beast on the Road tour. He was replaced by the band's current drummer, Nicko McBrain. Clive Burr co-wrote one song on The Number of the Beast, "Gangland", and another song, "Total Eclipse", that was cut from the album and showed up as the B-side of the "Run to the Hills" single, and later on the Number of the Beast remastered CD re-release.
In an interview with Classic Rock in February 2011, Clive Burr candidly discussed his split from Iron Maiden, describing much of what has been written about the split as "hogwash".
After "leaving" Iron Maiden, Clive Burr briefly played in the French group Trust and briefly with the American band Alcatrazz. He was featured in the short-lived supergroup Gogmagog and also had a band known as Clive Burr's Escape, featuring former Praying Mantis members, which disbanded after releasing one album. Clive Burr then joined Dee Snider in his post-Twisted Sister outfit Desperado, which was never fully realized due to a falling out with the band's record company. Clive Burr performed with British bands Elixir and Praying Mantis in the 1990s and appears on the Praying Mantis 1996 live album "Captured Alive in Tokyo," but did not become a full member of either.
Clive Burr had been diagnosed with multiple sclerosis, the treatment of which took him steeply into debt. Iron Maiden staged a series of charity concerts and were involved in the founding of the Clive Burr MS Trust Fund. Clive used a wheelchair because of his condition and he was the patron of Clive Aid, a charity formed in 2004 whi

ch has continued to raise awareness and funds for various cancer and multiple sclerosis programs around the world through the staging of rock events. Clive Burr attended many of these events.