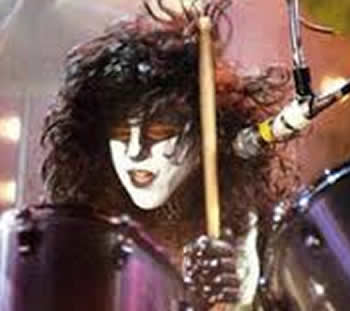 Eric Carr's final recording with Kiss was for the song "God Gave Rock 'N' Roll to You II", which featured him on backing vocals. The last time Eric Carr worked with Kiss was in July 1991 when Kiss filmed the video for "God Gave Rock 'N Roll to You" with Eric Carr playing drums. Eric Carr's last public appearance with KISS was at the MTV Video Music Awards in September 1991.
Eric Carr was a powerful hard-hitting drummer and one of the first drummers to adopt the classic 1980s snare drum sound: a highly reverberated and low-tuned sound. In his 1980 resume sent to Kiss, Eric Carr stated that his drumming style ranged from heavy metal and hard rock to pop and new wave claiming that "I can adapt to most situations easily."
Eric Carr's interest in double bass drumming came from his admiration of Ginger Baker and John Bonham and he also had a love of all types of music.