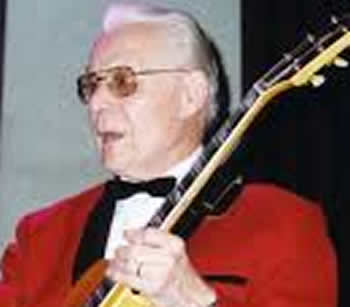 Franny Beecher died aged ninety-two on 24th February, 2014 from natural causes.
Franny Beecher had already had a lengthy career as a guitarist, having been in the Benny Goodman Orchestra, before he joined up with Bill Haley's Comets and his guitar work influenced young musicians playing the same venues.
Franny Beecher first worked with the Comets in fall of 1954 as a session musician, replacing the recently deceased guitarist Danny Cedrone. Franny Beecher's first work with Bill Haley was the single "Dim, Dim the Lights". Franny Beecher was instructed to make his guitar solos less jazzy and more rockabilly.
At the time Franny Beecher began working with Bill Haley's group, Bill Haley did not employ a full-time lead guitarist who would also play on live shows and TV appearances sinch such duties were usually handled by Bill Haley himself or by steel guitarist Billy Williamson. In August 1955, Franny Beecher appeared for the first time on national TV with the Comets performing "Rock Around the Clock", and soon afterward was promoted to a full-time member of the band, appearing with the group in the films Rock Around the Clock in 1956 and Don't Knock the Rock in 1956.
Franny Beecher had the ability to send his voice into a high pitch hence making it sound like that of a small child and this gimmick was used for the opening of the big hit single "See You Later Alligator".  In 1959, Billy Williamson and Franny Beecher recorded a duet, "ABC Rock", in which Franny Beecher sang two entire verses in his "little-kid" voice.
In 1958, Franny and the other Comets recorded under the name The Kingsmen, releasing several 45 singles for East West Records. The single "Week End", backed with "Better Believe It", reached number 35 on the Billboard pop singles chart in November, 1958 and The follow-up single was "Conga Rock" b-sided by "The Catwalk".
Franny Beecher left the Comets in 1960 in order to work with a spin-off group called the Merri-Men which released a 45 single on Apt Records, "Big Daddy"/"St. Louis Blues" and he returned to The Comets in 1961 only to leave again in 1962. A few months later, he agreed to sit in with the band for a live album recording session for Roulette Records for the album entitled 'Twisting Knights at the Roundtable'.

After Bill Haley's death in 1981, Franny Beecher toured with a short-lived Comets reunion group. Finally, starting in 1987, the surviving members of the 1954-55 Comets reunited and proceeded to tour the world and make new recordings for the next two decades. Franny Beecher performed with this group until July 2006, after which the group announced he had retired.
With the Comets, Franny Franny Beecher played a black 1956 Gibson Les Paul Custom guitar which was given to him by the Gibson Guitar Company.

song: 'Week-End' by The Kingsmen