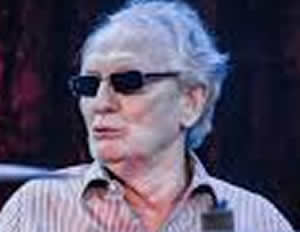 Canterbury, Kent, England.   In September, 2019, his family had announced that Ginger was critically ill and asked fans to keep him in their prayers.
Ginger Baker was survived by daughters Ginette, Nettie and Leda, and son, Kofi, and first wife, Liz.
Ginger Baker was born Peter Edward Baker in Lewisham, South London, United Kingdom on 19th August, 1939 and was nicknamed "Ginger" for his shock of flaming red hair. His mother worked in a tobacco shop; his father, Fred Baker, was a bricklayer.
Ginger began playing drums at about fifteen years old. In the early 1960's he took lessons from Phil Seamen, one of the leading British jazz drummers of the post-war era. He gained early fame as a member of the Graham Bond Organisation with future Cream bandmate Jack Bruce. The Graham Bond Organisation was an Rythm&blues group with strong jazz leanings.
Ginger Baker co-founded the rock band Cream in 1966 with bassist Jack Bruce and guitarist Eric Clapton. A fusion of blues, psychedelic rock and hard rock, the band released four albums in slightly over two years before disbanding in 1968.
Ginger Baker then joined the short-lived "supergroup" Blind Faith, composed of Eric Clapton, bassist Ric Grech from Family, and Steve Winwood from Traffic on keyboards and vocals. They released only one album, the eponymous 'Blind Faith, before breaking up.
In 1970 Ginger Baker formed, toured and recorded with fusion rock group Ginger Ginger Baker's Air Force.
In November 1971, Ginger Baker decided to set up a recording studio in Lagos, the then capital of Nigeria. He decided that it would be an interesting experience to travel to Nigeria overland across the Sahara Desert. Ginger Baker invited documentary filmmaker Tony Palmer to join him and the film 'Ginger Baker in Africa' follows his odyssey as he makes his journey and finally arrives in Nigeria to set up his studio. After many frustrating set-backs and technical hitches, Batakota (ARC) studios opened at the end of January 1973, and operated successfully through the seventies as a facility for both local and western musicians. Paul McCartney and Wings recorded for Band on the Run at the studio.
Ginger Baker sat in for Fela Kuti during recording sessions in 1971 released by Regal Zonophone as Live! Fela also appeared with Ginger Baker on Strata

various, from 1972, alongside Bobby Tench from the Jeff Beck Group. Stratavarious was later re-issued as part of the compilation 'Do What You Like' in 1998). Ginger Baker formed Ginger Baker Gurvitz Army with brothers Paul and Adrian Gurvitz in 1974. The band recorded three albums, Ginger Baker Gurvitz Army in 1974, Elysian Encounter in 1975 and Hearts on Fire in 1976, and the band toured through England and Europe in 1975. The Ginger Baker Gurvitz Army disbanded in 1976.
In 1980, Ginger Baker joined Hawkwind after initially playing as a session musician on the album Levitation. He left in 1981, after a tour. Live material and studio demos from that period feature on a further two Hawkind albums, released later in the 1980s. In 1985, producer Bill Laswell talked him into doing some session work on John Lydon's Public Image Ltd. album.
Ginger Baker moved to Los Angeles in the late 1980s intending to become an actor. He appeared in the 1990 TV series Nasty Boys as Ginger.
In 1992 Ginger Baker played with the hard rock group Masters of Reality with bassist Googe and singer/guitarist Chris Goss on the album Sunrise on the Sufferbus.
Ginger Baker lived in Parker, Colorado between 1993 and 1999, in part due to his passion for polo. Ginger Baker not only participated in polo events at the Salisbury Equestrian Park, but he also sponsored an ongoing series of jam sessions and concerts at the equestrian centre on weekends. In 1994, he performed in The Ginger Baker Trio with bassist Charlie Haden and guitarist Bill Frisell and also BBM, a short-lived power trio with the line-up of himself with bassist Jack Bruce and guitarist Gary Moore.