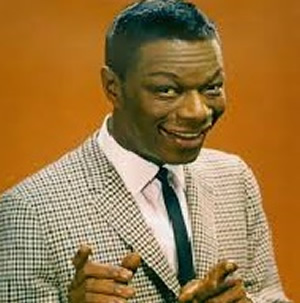 In September 1964, Nat King Cole had begun losing weight and experiencing back pain. He was appearing in a touring musical revue, Sights and Sounds, commuting to Los Angeles to film music for Cat Ballou, and becoming increasingly involved in an extramarital relationship with a 19-year-old Swedish dancer, Gunilla Hutton, which led his wife Maria to contemplate divorce. Nat King Cole collapsed with pain after performing at the Sands in Las Vegas and was finally persuaded by friends to seek medical help during December, whilst he was working in San Francisco. A malignant tumor on his left lung, in an advanced state of growth, was observed on a chest X-ray. Nat King Cole, who had been a heavy cigarette smoker, had lung cancer and it was expected that he had only months remaining to live. He carried on working, against his doctors' wishes, and made his final recordings during December 1st, 2nd and 3rd in San Francisco, with an orchestra conducted by Ralph Carmichael which was released on the album L-O-V-E shortly before his death.
Nat King Cole entered St. John's Hospital in Santa Monica, California, U.S.A. on 7th December 1964 and cobalt therapy was commenced on 10th December. Frank Sinatra performed in Nat King Cole's place at the grand opening of the new Dorothy Chandler Pavilion of the Los Angeles Music Center on 12th December 1964. Nat King Cole's condition gradually worsened, however, he was released from the hospital over that New Year's period. At home Nat King Cole was able to view the hundreds of thousands of cards and letters that had been sent after news of his illness was made public. After returning to the hospital in early January, Nat King Cole's entire left lung was surgically removed. Throughout Nat's illness his publicists had promoted the idea that he would soon be well and working, despite the then undisclosed knowledge of his terminal condition.] On St.Valentine's Day 1965, Nat King Cole and his wife briefly left St. John's Hospital to drive by the sea. Nat died at the hospital early in the morning of February 15, 1965, aged forty-five.
Nat King Cole's funeral was held on 18th February at St. James Episcopal Church on Wilshire Boulevard in Los Angeles U.S.A. The remains were interred in Freedom Mausoleum at Forest Lawn Memorial Park, in Glendale, California, U.S.A.

an all-jazz album, After Midnight, and many of his albums after this are fundamentally jazz-based, being scored for big band without strings, although the arrangements focus primarily on the vocal rather than instrumental leads. Nat King Cole had one of his last major hits in 1963, two years before his death, with "Those Lazy-Hazy-Crazy Days of Summer", which reached number six on the Pop chart. "Unforgettable" was made famous again in 1991 by Nat's daughter Natalie when modern recording technology was used to reunite father and daughter in a duet. The duet version rose to the top of the pop charts, almost forty years after its original popularity.
Around the time Nat King Cole launched his singing career, he entered into Freemasonry. He was raised in January 1944 in the Thomas Waller Lodge No. 49 in California. The lodge was named after fellow Prince Hall mason and jazz musician Fats Waller. Nat King Cole was "an avid baseball fan", particularly of Hank Aaron. In 1968, Nelson Riddle related an incident from some years earlier and told of music studio engineers, searching for a source of noise, finding Nat listening to a game on a transistor radio.
Nat King Cole met his first wife, Nadine Robinson, while they were on tour for the all-black Broadway musical Shuffle Along. He was only seventeen when they married. She was the reason he landed in Los Angeles and formed the Nat King Cole trio. This marriage ended in divorce in 1948. In March 1948 , just six days after his divorce became final, Nat married the singer Maria Hawkins Ellington (she had sung with the Duke Ellington band but was not related to Duke Ellington). The Coles were married in Harlem's Abyssinian Baptist Church by Adam Clayton Powell Jr. They had five children: Natalie, who had a successful career as a singer; an adopted daughter, Carole, the daughter of Maria's sister, an adopted son, Nat Kelly Cole , and twin daughters, Casey and Timolin. Maria supported him during his final illness and stayed with him until his death.