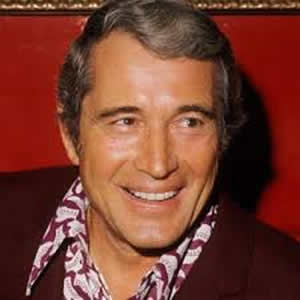 , at his home in Jupiter Inlet Colony, Florida, U.S.A. just six days before his 89th birthday. He was reported to have suffered from symptoms of Alzheimer's disease. His funeral Mass took place at St. Edward's Catholic Church in Palm Beach, Florida U.S.A. Both Perry Como and his wife, Roselle are buried at Riverside Memorial Park, Tequesta, Palm Beach County, Florida, U.S.A.
Perry Como was born in Canonsburg, Pennsylvania. He was the seventh of ten children and the first American-born child of Pietro Como and Lucia Travaglini, who both emigrated to the US in 1910 from the Abruzzese town of Palena, Italy. The family had a second-hand organ his father had bought for three dollars and as soon as Perry was able to toddle, he would head to the instrument, pump the bellows, and play music he had heard by ear. Pietro, a mill hand and an amateur baritone, had all his children attend music lessons even if he could barely afford them. In a rare 1957 interview, Perry's mother, Lucia, described how her young son also took on other jobs to pay for more music lessons. Perry learned to play many different instruments, but never had a voice lesson. He showed more musical talent in his teenage years as a trombone player in the town's brass band, playing guitar, singing at weddings, and as an organist at church. Perry was a member of the Canonsburg Italian Band along with the father of singer Bobby Vinton, bandleader Stan Vinton, who was often a customer at his barber shop.
Young Perry started helping his family at age ten, working before and after school in Steve Fragapane's barber shop for fifty cents a week. By age thirteen he had graduated to having his own chair in the Fragapane barber shop, although he stood on a box to tend to his customers. It was also around this time that young Perry lost his week's wages in a dice game. Filled with shame, he locked himself in his room and did not come out until hunger got the better of him. He managed to tell his father what had happened to the money his family depended on. His father told him he was entitled to make a mistake and that he hoped his son would never do anything worse than this. When Perry was fourteen, his father became unable to work because of a severe heart condition. Perry and his brothers became the support of the household.
Despite his musical ability, Perry's primary ambition was to become the best barber in Canonsburg. Practicing on his father, young Perry mastered the skills well enough to have his own shop at age fourteen. One of Perry's regular customers at the barber shop owned a Greek coffee house that included a barber shop area, and asked the young barber whether he would like to take over that portion of his shop. Perry had so much work after moving to the coffee house, he had to hire two barbers to help with it. His customers worked mainly at the nearby steel mills. They were well-paid, did not mind spending money on themselves and enjoyed Perry's song renditions. Perry did especially well when one of his customers would marry. The groom and his men would avail themselves of every treatment Perry and his assistants had to offer. Perry sang romantic songs while busying himself with the groom as the other two barbers worked with the

rest of the groom's party. During the wedding preparation, the groom's friends and relatives would come into the shop with gifts of money for Perry. He became so popular as a "wedding barber" in the Greek community that he was asked to provide his services in Pittsburgh and throughout Ohio.
In 1929, the seventeen-year-old Perry met Roselle Belline at a picnic on Chartiers Creek that attracted many young people from the Canonsburg area. Perry, who attended the cookout with another girl, did not spot Roselle until everyone was around the campfire singing and the gathering was coming to a close. When it came to Perry's turn to sing, he chose "More Than You Know", with his eyes on Roselle for the entire song. The teenage sweethearts were married in July 1933. They raised three children, Ronnie, David, and Terri, with traditional, non-show-business values.
In 1958, the Comos celebrated their silver wedding anniversary with a family trip to Italy. On the itinerary was an audience with Pope Pius XII. Perry Como, who sat in a side wing of the Long Island church where he attended Sunday Mass in an effort to avoid attracting attention, was both puzzled and upset on returning home that photos from the visit made the newspapers throughout the world. A thorough check of both the Como and NBC publicity offices found that neither was responsible for the release of the photos to the media; it was done by the Vatican's press department. When Perry and Roselle became Knight Commander and Lady Commander of the Equestrian Order of the Order of the Holy Sepulchre in 1952, it was a news item only after Archbishop Fulton J. Sheen, who had been honored at the same ceremony, mentioned it some time later.
Perry Como suffered a debilitating fall from a stage platform in 1971 while taping Perry Como's Winter Show in Hollywood. X-rays showed no serious injury to his knee, but by the next morning, it was twice its normal size. The ailing Perry chartered a jet back to his home and doctors in Florida, where a second exam showed it had been seriously broken. His knee was re-set and placed in a cast with a recuperation time of eight months. In 1993, he was successfully treated for bladder cancer. When Roselle died suddenly in August 1998, at the age of eighty-four, the couple had been married for 65 years and Perry was reportedly devastated by the loss.

Do you like this website? If so, then please copy and email the link: http://www.rockapaedia.com to your friends and aquaintances. Thankyou.

song: 'For The Goodtimes' by Perry Como