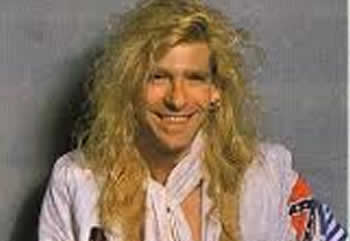 London, United Kingdom. At the time of his death, Steve was on a six-month leave of absence from Def Leppard. Steve was found dead on a couch by his girlfriend. The postmortem revealed that the cause of death was respiratory failure caused by a lethal mixture of alcohol and prescription drugs. He was buried at Wisewood Cemetery in Loxley, Sheffield, close to the Clark family estate.
Steve Clark was engaged to an American model, Lorelei Shellist, the two having been together seven years. Lorelei revealed in her autobiography, Runway Runaway, that Steve's addictions played a major role in their breakup.
Steve was birth-named Stephen Maynard Clark on 23rd April 1960 and raised in Hillsborough, a suburb of Sheffield, United Kingdom. From an early age, he showed an interest in music, attending his first concert featuring Cliff Richard and the Shadows at age six. At eleven, he received his first guitar which was purchased by his father on the condition that he learn to play. Steve studied classical guitar for a year before he first heard the music of Jimmy Page and Led Zeppelin at a friend's house.
When Steve Clark left school his first employer was an engineering firm called GEC Traction where he worked as a lathe operator. He was three years into a four-year apprenticeship with the firm at the time Def Leppard was signed to a record deal with Phonogram Records.
Before joining Def Leppard in 1978, Steve Clark played cover songs with his small band, Electric Chicken, in Sheffield. Around that time, he met Pete Willis, Def Leppard's original guitarist and founder, at a technical college. Pete Willis spotted Steve Clark reading a guitar book and asked if he played. He then invited Steve to come and audition for his band, as they were looking to add a second guitarist. Steve Clark never showed up, but when Pete Willis and singer Joe Elliott bumped into Steve Clark again at a Judas Priest gig, Pete re-issued his invitation. Steve Clark finally came down to their rehearsal room and joined Def Leppard in January 1978. According to Joe Elliott in Behind the Music, Steve Clark auditioned for Def Leppard by playing all of Lynyrd Skynyrd's "Free Bird" without accompaniment.
While a member of Def Leppard, Steve Clark contributed to over 90% of the music. Steve Clark and Pete Willis shared lead-guitar duties, and Steve Clark was nicknamed "The Riffmaster" due to his amazing talent and ability to come up with some of the coolest guitar riffs in modern rock. Toward the end of the Pyromania recording sessions, Pete Willis was asked to leave, and guitarist Phil Collen was recruited into the band to replace him.
Steve Clark and Phil Collen quickly bonded, becoming close friends and leading to the trademark dual-guitar sound of Def Leppard. He and Steve Clark became known as the "Terror Twins" in recognition of their close friendship and alcohol-fuelled antics off-stage. Part of their success as a duo was attributed to their ability to swap between rhythm and lead guitar, often both playing lead or both doing rhythm within the same song. The fact that they came from entirely different musical backgrounds also contributed to their unique guitar partnership. Steve Clark was a classically-trained musician who knew the rules of music and could read and write music and understood the theory and science of the art, as well as studying/being influenced by Jimmy Page and Led Zeppelin, whereas Phil Collen, like Willis, was self-taught and developed his fast, alternate-picking technique from studying Al Di Meola and listening to Jazz players.
Whereas Phil Collen stopped drinking alcohol during the mid-1980s in pursuit of a healthier lifestyle, Steve Clark never managed to escape his addiction to alcohol. Steve Clark primarily played Gibson Guitars during his career and signed an endorsement with Gibson sometime before the commencement of the Hysteria World Tour. Gibson made some custom-specification guitars for Steve Clark. He was occasionally seen playing other guitars, including a Fender Stratocaster for the song and video "Love Bites". Steve Clark would also use Fenders in the studio occasionally, due to their unique sound. Steve Clark always stated that he was more of a traditionalist when it came to guitars. This can be seen in his selection of gear. At the time of his death, it was estimated that he owned approximately seventy-five guitars.

Although his name appears on many songwriting credits for Def Leppard's 1992 album, Adrenalize, he did not contribute much to the recording of the album. In the liner notes of the Adrenalize deluxe edition, Joe Elliot claims that a few riffs Steve Clark had demoed were used in a couple of places on the album. His only other contribution was a thumbs up here and there and stating something the rest of the band was working on was "cool." Phil Collen and Steve Clark began working on what would become the song "White Lightning" during the recording sessions for the 1992 album, Adrenalize. Completed after Steve Clark's death, the song described the effects of Steve Clark's alcohol and drug addictions