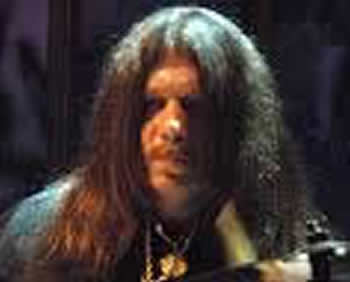 on a sharp road curve in Cartersville, Georgia, U.S.A., shortly after leaving his home.
Bob Burns was born Robert Lewis Burns Jr on November 24th, 1950 in Jacksonville, Florida, U.S.A. Bob helped to form Lynyrd Skynyrd in 1964 with Ronnie Van Zant, Gary Rossington, Allen Collins and Larry Junstrom and remained until 1974, although by some accounts he left the band for a while during the early 1970s. Bob Burns plays on the band's earliest demos, recorded in 1970, but on the album Skynyrd's First and... Last, a collection of early demos, the drum parts of the songs recorded in 1971 are played by Rickey Medlocke. That album also contains songs recorded in 1972 which feature BobBurns on drums, suggesting that Bob Burns may have left the band in 1971 and had returned by 1972. During a brief period in the early 1970s, Rickey Medlocke occasionally played alongside Bob Burns on drums for live shows, a two-drummer line-up similar to The Allman Brothers Band.
In addition to Skynyrd's First And... Last, Bob Burns also played on the band's first two official albums: (Pronounced 'Leh-'nérd 'Skin-'nérd) and Second Helping. Bob Burns left in 1974 due to being overwhelmed by life on the road, and was replaced by Artimus Pyle. In 1996, he participated in a performance to promote Freebird: The Movie. On March 13, 2006, he rejoined Lynyrd Skynyrd for one performance as he played alongside Gary Rossington, Billy Powell, Ed King, Artimus Pyle and the Honkettes at the Rock and Roll Hall of Fame induction.