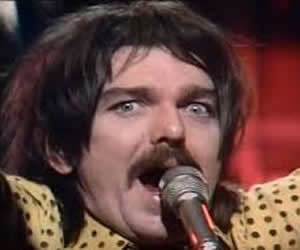 plications of multiple sclerosis at a hospital in Arcata, California, U.S.A. just weeks short of his seventieth birthday. The Michael Werner Gallery, which represented his painting output, described him as "a complex and influential figure in the visual and performing arts" and "one of the most original recording artists of his time". The cause was named as . Tom Waits and Kathleen Brennan commented on his death, praising him: "Wondrous, secret ... and profound, he was a diviner of the highest order.

urinate with the bathroom door open and, if she was walking by, would mumble about his penis, saying "Ahh, what a beauty! It looks just like a big, fine beef heart". In a 1970 interview with Rolling Stone, Captain Beefhart requests "don't ask me why or how" he and Zappa came up with the name. Johnny Carson also asked him the same question to which Captain Beefhart replied that one day he was standing on the pier and saw fishermen cutting the bills off pelicans. He said it made him sad and put "a beef in his heart". Carson appeared nervous and uncomfortable interviewing Captain Beefhart and after the next commercial break Captain Beefhart was gone. He would later claim in an appearance on Late Night with David Letterman that the name referred to "a beef in my heart against this society". In the "Grunt People" draft script Beefheart and his mother play themselves, with his father played by Howlin' Wolf. Grace Slick is penned in as a "celestial seductress" and there are also roles for future Magic Band members Bill Harkleroad and Mark Boston.
Van Vliet enrolled at Antelope Valley Junior College as an art major, but decided to leave the following year. He once worked as a door-to-door vacuum cleaner salesman, and sold a vacuum cleaner to the writer Aldous Huxley at his home in Llano, pointing to it and declaring, "Well I assure you sir, this thing sucks." After managing a Kinney's shoe store, Captain Beefhart relocated to Rancho Cucamonga, California, to reconnect with Zappa, who inspired his entry into musical performance. Van Vliet was quite shy but was eventually able to imitate the deep voice of Howlin' Wolf with his wide vocal range. He eventually grew comfortable with public performance and, after learning to play the harmonica, began playing at dances and small clubs in Southern California.
In early 1965 Alex Snouffer, a Lancaster rhythm and blues guitarist, invited Vliet to sing with a group that he was assembling. He joined the first Magic Band and changed his name to Don Van Vliet, while Snouffer became Alex St. Clair (sometimes spelled Claire). Captain Beefheart and his Magic Band signed to A&M and released two singles in 1966. The first was a version of Bo Diddley's "Diddy Wah Diddy" that became a regional hit in Los Angeles. The followup, "Moonchild" (written by David Gates, later of the band Bread) was less well received. The band played music venues that catered to underground artists, such as the Avalon Ballroom in San Francisco

Do you like this website? If so, then please copy and email the link: http://www.wormz.xyz to your friends and aquaintances. Thankyou.