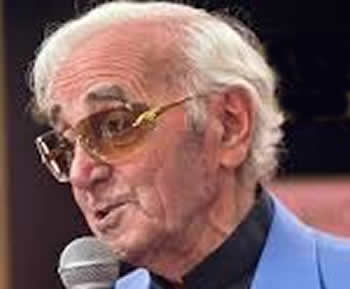 b at home at Mouries in France. An autopsy report concluded that he died of cardiorespiratory arrest complicated by an acute pulmonary edema.

es Aznavour Toujours, featuring 11 new songs, and Elle, a French re-working of his greatest international hit, "She". Following the release of Charles Aznavour Toujours, the then 87-year-old Charles Aznavour began a tour across France and Europe, named Charles Aznavour en Toute Intimité, which started with twenty-one concerts in the Olympia theatre in Paris. On 12th December 2011 he gave a concert in Moscow State Kremlin Palace which attracted a capacity crowd. The concert was followed by a standing ovation which continued for around fifteen minutes.
In 2012, Charles Aznavour embarked on a new North American leg of his En toute intimité tour, visiting Quebec and the Gibson Amphitheatre in Los Angeles, the third-largest such venue in California, for multiple shows. The shows in New York were cancelled following a contract dispute. On 16th August 2012 Charles Aznavour performed in his father's birthplace, Akhaltsikhe, in Georgia in a special concert as part of the opening ceremony of the recently restored Rabati castle.
On 25th October 2013 Charles Aznavour performed in London for the first time in 25 years at the Royal Albert Hall. Demand was so high that a second concert at the Royal Albert Hall was scheduled for June 2014. In November 2013, Charles Aznavour appeared with Achinoam Nini in a concert, dedicated to peace, at the Nokia Arena in Tel Aviv to which the audience, including Israeli president Shimon Peres, sang along. In December 2013 Charles Aznavour gave two concerts in the Netherlands at the Heineken Music Hall in Amsterdam, and again in January 2016.
In 2017 and 2018, his tour continued in São Paulo, Rio de Janeiro, Santiago, Buenos Aires, Moscow, Vienna, Perth, Sydney, Melbourne and Haiti, Tokyo, Osaka, Madrid, Milano, Rome, St. Petersburg, Paris, London, Amsterdam and Monaco. On 19th September 2018 what was to be his last concert took place in NHK Hall, Osaka, Japan.