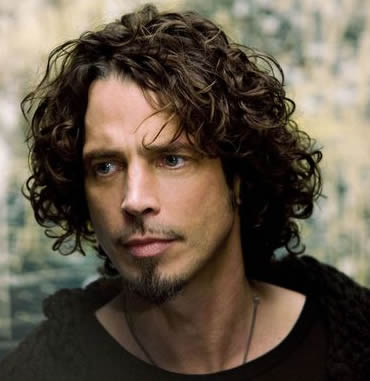 efore he was found dead by his bodyguard in the bathroom of a room at the MGM Grand Hotel in Detroit, Michigan, U.S.A.. He had performed at a show with Soundgarden at the nearby Fox Theatre during the night before. He was found lying on the floor with an exercise band around his neck. Paramedics arrived and tried to resuscitate him but he was pronounced dead and the cause of death was determined to be suicide by hanging. . Michigan's Wayne County Medical Examiner released the autopsy and toxicology report on the death of Chris Cornell on 2nd June 2017, with the coroner confirming that the manner of death was suicide and that drugs did not directly contribute to the cause of death . His funeral was at the Hollywood Forever Cemetery, 6000 Santa Monica Boulevard, Los Angeles, California, U.S.A. Noteable celebrity guests included Nile Rodgers, Courtney Love, Joe Walsh, Christian Bale and Brad Pitt. Chester Bennington performed the Leonard Cohen song 'Hallelujah' at the memorial; just months before his own death by suicide.
Chris Cornell was born Christopher John Boyle on 20th July 1964 in Seattle, Washington, USA where he was raised. Chris attended a Catholic elementary school, where he performed for the first time in front of a crowd, singing the 1960s anti-war song "One Tin Soldier", and later he went to Shorewood High School.

In the early nineteen eighties Chris Cornell was a member of a cover band called The Shemps, which featured bassist Hiro Yamamoto and performed around Seattle. After Yamamoto left The Shemps, the band recruited guitarist Kim Thayil. Cornell and Yamamoto stayed in contact, and after The Shemps broke up, the pair started jamming together, eventually bringing Kim Thayil in to join them.
Soundgarden was formed in 1984 by Chris Cornell, Thayil and Yamamoto with Chris originally on drums and vocals. In 1985, the band enlisted Scott Sundquist as the drummer to allow Chris to concentrate on vocals. The band's first recordings were three songs that appeared on a compilation for C/Z Records called Deep Six. In 1986, Sundquist, quit and was replaced by Matt Cameron, the drummer for Skin Yard, who then became Soundgarden's permanent drummer but the band eventually broke up.
In January 2011, Chris Cornell announced his solo acoustic "Songbook" tour, continuing a series of acclaimed solo acoustic shows in Los Angeles during 2009 and 2010. The first leg of the sold-out tour began on 1st April 2011 and continued through the U.S. and Canada until May, resuming in October and visiting New Zealand, Australia, South America and the U.S. again before ending in December. The tour received universally positive reviews.
In August 2011, Chris Cornell released "The Keeper", an original song written for the Marc Forster-directed 2011 film Machine Gun Preacher and nominated in 2012 for a Golden Globe Award. For the first twenty-four hours after its release, the song was exclusively available as part of the "Donate to Download" campaign for Sam Childers' Angels of East Africa children's charity. The song is also the lead track on the film's soundtrack album.
In November 2011 Chris Cornell, released Songbook, an acoustic live album featuring songs recorded during Chris' "Songbook" tour in North America. It was his first live album as a solo artist and includes stripped-down solo performances of songs from Chris Cornell's whole career as a solo artist as well as with Soundgarden, Audioslave, and Temple of the Dog, plus covers of Led Zeppelin's "Thank You" and John Lennon's "Imagine". The album received largely positive reviews, with AllMusic calling it Chris Cornell's "best solo offering to date". Chris Cornell continued his "Songbook" tour in Europe and the U.S. during 2012 and 2013 to further acclaim.
In 2013, Chris Cornell wrote the song "Misery Chain", for the soundtrack to the film 12 Years a Slave, in which he performed a duet with Joy Williams.
In January 2015, Chris Cornell announced via his Twitter account that he was in the studio recording a new solo album. Chris Cornell's new studio album, 'Higher Tru

th', was released on September 18th 2015. In 2016, Chris Cornell covered the song "Stay With Me Baby" for the soundtrack of the HBO TV series Vinyl. Chris Cornell said about recording the song that he was very honored to be asked to record a version of 'Stay With Me Baby' for Vinyl. The last solo release prior to his death, was the charity single "The Promise", written for the ending credits for the movie of the same name about the Armenian Genocide.
All of Audioslave's lyrics were written by Chris Cornell, whilst all four members were credited with writing the music. Their songwriting process was described by Wilk as "more collaborative" and "satisfying" than Rage Against the Machine's, which was "a battle creatively". Chris Cornell, for his part, saw Soundgarden's songwriting method as inferior to Audioslave's. Chris Cornell's lyrics were mostly apolitical; Audioslave's Morello referred to them as "haunted, existential poetry." They were characterized by his cryptic approach, often dealing with themes of existentialism, love, hedonism, spirituality and Christianity. Chris Cornell's battle with addiction to prescription drugs and alcoholism was a defining factor in the writing and recording process. Even though Chris admitted that he was never able to write effectively while drinking, and attended rehab after recording the debut album, Morello stated that 'Revelations' was the first record that Chris Cornell didn't smoke, drink or take drugs through the recording.
In January 2017, it was announced that Audioslave would reunite for their first show in twelve years at Prophets of Rage's Anti-Inaugural Ball, protesting President Donald Trump's inauguration as President of the United States. The event took place on January 20th 2017.
Asked in February 2017 if there would be more Audioslave reunion shows in the future Chris Cornell replied that It's always a possibility.
While still in Soundgarden, Chris Cornell recorded an album with members of what would become Pearl Jam.
During a 2003 Pearl Jam show at the Santa Barbara Bowl, Chris Cornell had appeared as a surprise guest. After playing a short acoustic set, Chris joined Vedder and the rest of the band to perform "Hunger Strike" and "Reach Down".
Chris Cornell had a multi-octave range. He was a baritone with an ability to sing extremely high in the tenor range, as well as in the lower register of a baritone voice. He showcased this in various songs, most notably the studio and the demo versions of "Beyond the Wheel", where he can be heard spanning three octaves. He also experimented with various different vocal styles, ranging from light falsetto to brutal screams and chants. In addition to singing rock and metal mainly with Soundgarden and Audioslave, Chris also sang the blues, neo-soul and stripped-down acoustic numbers.