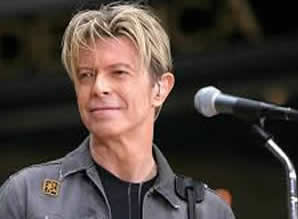 6 in his New York City apartment in New York, U.S.A., just two days after the release of his final album, 'Blackstar'.
David had been diagnosed eighteen months earlier but had not made the news of his illness public. The Belgian theatre director Ivo van Hove, who had worked with the singer on his Off-Broadway musical Lazarus, explained that David Bowie was unable to attend rehearsals due to the progression of the disease. He said that David Bowie had kept working during the illness.
Bowie's producer Tony Visconti wrote that David Bowie always did what he wanted to do and that he wanted to do it his way and he wanted to do it the best way and that his death was no different from his life – a work of art. He said that David made Blackstar for us, his parting gift and that he knew for a year this was the way it would be.

Bowie Bonds, an early example of celebrity bonds, were asset-backed securities of current and future revenues of the 25 albums (287 songs) that David Bowie recorded before 1990. Bowie Bonds were pioneered by rock and roll investment banker David Pullman. Issued in 1997, the bonds were bought for US$55 million by the Prudential Insurance Company of America. The bonds paid an interest rate of 7.9% and had an average life of ten years, a higher rate of return than a 10-year Treasury note (at the time, 6.37%). Royalties from the 25 albums generated the cash flow that secured the bonds' interest payments. Prudential also received guarantees from David Bowie's label, EMI Records, which had recently signed a $30m deal with David Bowie. By forfeiting ten years worth of royalties, David Bowie received a payment of US$55 million up front. David Bowie used this income to buy songs owned by his former manager.David Bowie's combined catalogue of albums covered by this agreement sold more than 1 million copies annually at the time of the agreement. By March 2004, Moody's Investors Service lowered the bonds from an A3 rating (the seventh highest rating) to Baa3, one notch above junk status.[139][140] The downgrade was prompted by lower-than-expected revenue "due to weakness in sales for recorded music" and that an unnamed company guaranteed the issue. Nonetheless, the bonds liquidated in 2007 as originally planned, without default, and the rights to the income from the songs reverted to David Bowie.

From the time of his earliest recordings in the 1960s, David Bowie employed a wide variety of musical styles. His early compositions and performances were strongly influenced by rock and rollers like Little Richard and Elvis Presley, and also the wider world of show business. He particularly strove to emulate the British musical theatre singer-songwriter and actor Anthony Newley, whose vocal style he frequently adopted, and made prominent use of for his 1967 debut release, David Bowie (to the disgust of Newley himself, who destroyed the copy he received from Bowie's publisher). David Bowie's music hall fascination continued to surface sporadically alongside such diverse styles as hard rock and heavy metal, soul, psychedelic folk and pop.
Musicologist James Perone observes Bowie's use of octave switches for different repetitions of the same melody, exemplified in his commercial breakthrough single, "Space Oddity", and later in the song "Heroes", to dramatic effect; Perone notes that "in the lowest part of his vocal register ... his voice has an almost crooner-like richness."
Voice instructor Jo Thompson describes Bowie's vocal vibrato technique as "particularly deliberate and distinctive". Schinder and Schwartz call him "a vocalist of extraordinary technical ability, able to pitch his singing to particular effect." Here, too, as in his stagecraft and songwriting, the singer's role playing is evident: historiographer Michael Campbell says that Bowie's lyrics "arrest our ear, without question. But David Bowie continually shifts from person to person as he delivers them ... His voice changes dramatically from section to section." In a 2014 analysis of 77 "top" artists' vocal ranges, Bowie was 8th, just behind Christina Aguilera and just ahead of Paul McCartney. In addition to the guitar, Bowie also played keyboards, harmonica, saxophone, stylophone, viola, cello, koto, thumb piano, drums and percussion.
Following David Bowie's death, fans gathered at impromptu street shrines. At the mural of Bowie in his birthplace of Brixton, south London, which shows him in his Aladdin Sane character, fans laid flowers and sang his songs. Other memorial sites included Berlin, Los Angeles, and outside his apartment in New York. After news of his death, sales of his albums and singles soared.David Bowie had insisted that he did not want a funeral, and according to his death certificate he was cremated in New Jersey on 12 January.
On 7th January 2017 the BBC broadcast the 90-minute documentary David Bowie: The Last Five Years, taking a detailed look at David Bowie's last albums, The Next Day and Blackstar, and his play Lazarus. On 8 January 2017, which would have been Bowie's 70th birthday, a charity concert in his birthplace of Brixton was hosted by the actor Gary Oldman, a close friend. A David Bowie walking tour through Brixton was also launched, and other events marking his birthday weekend included concerts in New York, Los Angeles, Sydney and Tokyo.