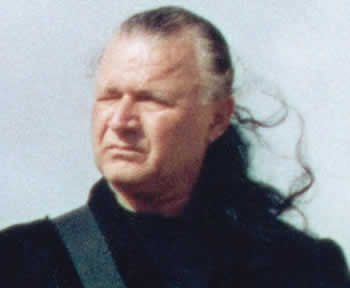 U.S.A. after being treated for heart failure and kidney failure. He was survived by his wife and manager, Lana and his son James.
Dick had stated that he never used alcohol or other drugs, for health reasons, and discouraged their use by band members and road crew. Dick had continued to perform at venues across the U.S.A. in order to pay for medical bills and at the time of his death, he had tour dates scheduled into November 2019.
Dick Dale was born Richard Anthony Monsour in Boston, Massachusetts, on 4th May 1937 and was of Lebanese descent from his father and Polish-Belarusian descent from his mother. He learned the piano when he was nine after listening to his aunt playing it and was given a trumpet in seventh grade, and later acquired a ukulele after becoming influenced by Hank Williams.
Dick then bought a guitar from a friend for eight dollars and learned to play it using a combination of styles incorporating both lead and rhythm styles, so that the guitar filled the place of drums. His early tarabaki drumming later influenced his guitar playing, particularly his rapid alternate picking technique. Dick Dale referred to this as "the pulsation", noting all instruments he played derived from the tarabaki. He was raised in Quincy then the family moved to El Segundo, California. Dick spent his senior year at and graduated from Washington Senior High School. He learned to surf at the age of seventeen. He retained a strong interest in Arabic music, which later played a major role in his development of surf rock music.
Dick Dale began playing in local country bars where he met Texas Tiny, who gave him the name "Dick Dale" because he thought it was a good name for a country singer.
Dick employed non-Western scales in his playing. He regularly used reverb, which became a trademark of surf guitar. Being left-handed, Dick tried to play a right-handed guitar, but then changed to a left handed model. However, he did so without restringing the guitar, leading him to effectively play the guitar upside-down, often playing by reaching over the fretboard, rather than wrapping his fingers up from underneath. He partnered with Leo Fender to test new equipment. His combination of loud amplifiers and heavy gauge strings led him to be called the "Father of Heavy Metal". After blowing up several Fender amplifiers, Leo Fender and Freddie Tavares saw Dick Dale play at the Rendezvous Ballroom, Balboa, California and identified the problem arose from him creating a sound louder than the audience screaming. The pair visited the James B. Lansing loudspeaker company and ask for a custom 15-inch loudspeaker, which became the JBL D130F model, and was known as the Single Showman Amp. Dick Dale's combination of a Fender Stratocaster and Fender Showman Amp allowed him to attain significantly louder volume levels unobtainable by then-conventional equipment.
Dick Dale's performances at the Rendezvous Ballroom in Balboa in mid to late 1961 are credited with the creation of the surf music phenomenon. Dick Dale successfully asked for permission to use the 3,000 person capacity ballroom for surfer dances after overcrowding at a local ice cream parlor where he performed made him seek other venues. The Rendezvous ownership and the city of Newport Beach agreed to Dick Dale's request on the condition that he prohibit alcohol sales and implement a dress code. Dick Dale's events at the ballrooms, called "stomps," quickly became legendary, and the events routinely sold out.
Dick Dale's record Misirlou in 1962, was a surf rock version of a folk song and is often considered his signature single.

"Let's Go Trippin'" is one of the first surf rock songs. This was followed by more locally released songs, including "Jungle Fever" and "Surf Beat" on his own Deltone label. His first full-length album was Surfers' Choice in 1962. The album was picked up by Capitol Records and distributed nationally, and Dick Dale soon began appearing on The Ed Sullivan Show, and in films where he played his signature single "Misirlou". His second album was named after his performing nickname, "King of the Surf Guitar".
Dick Dale later said "There was a tremendous amount of power I felt while surfing and that feeling of power was simply transferred into my guitar". His playing style reflected the experience he had when surfing, and projecting the power of the ocean to people.

Dick Dale and the Del-Tones performed both sides of his Capitol single, "Secret Surfin' Spot" in the 1963 movie, Beach Party, starring Frankie Avalon and Annette Funicello. The group performed the songs "My First Love," "Runnin' Wild" and "Muscle Beach" in the 1964 film, Muscle Beach Party. 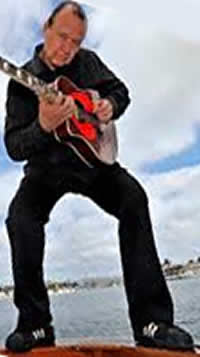 Surf rock's national popularity was somewhat brief, as the British Invasion began to overtake the American charts in 1964. Though he continued performing live, Dick Dale developed colorectal cancer. In the liner notes of Better Shred Than Dead: The Dick Dick Dale Anthology, Dick Dale quoted Jimi Hendrix saying, "Then you'll never hear surf music again" in response to hearing he might be terminally ill. Dick Dale covered "Third Stone from the Sun" as a tribute to Hendrix. Though he recovered, he retired from music for several years. In 1979, he almost lost a leg after being injured while swimming and a pollution-related infection made the mild injury much worse. As a result, Dick Dale became an environmental activist and soon began performing again. He recorded a new album in 1986 and was nominated for a Grammy. In 1987 he appeared in the movie Back to the Beach, playing surf music and performing "Pipeline" with Stevie Ray Vaughan.

The use of "Misirlou" in the 1994 Quentin Tarantino film Pulp Fiction gained him a new audience. The following year, John Peel praised his playing following a gig in the Garage, London. Peel later selected "Let's Go Trippin'" as the theme tune for his BBC Radio 4 series Home Truths. The same year, he recorded a surf-rock version of Camille Saint-Saëns's "Aquarium" from The Carnival of the Animals for the musical score of the enclosed roller coaster, Space Mountain at Disneyland in Anaheim, California.
In 2009, Dick Dale was inducted into the Musicians Hall of Fame and Museum in Nashville, Tennessee. He is also a 2011 inductee into the Surfing Walk of Fame in Huntington Beach, California, in the Surf Culture category.
<<go to top>>