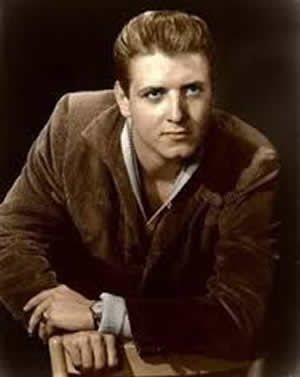 in a traffic accident in a taxi whilst travelling through Chippenham, Wiltshire, U.K.. The speeding taxi blew a tire, the driver lost control, and the vehicle crashed into a lamppost on Rowden Hill, where a plaque now marks the spot. No other car was involved. Eddie Cochran, who was seated in the center of the back seat, threw himself over his fiancée (songwriter Sharon Sheeley) to shield her and was thrown out of the car when the door flew open. He was taken to where he died of severe head injuries at 4:10 p.m. the following day. Eddie Cochran's body was flown home, and his remains were buried on April 25, 1960, at Forest Lawn Memorial Park in Cypress, California.
Sharon Sheeley, tour manager Pat Thompkins, and singer Gene Vincent survived the crash, Vincent sustaining lasting injuries to an already permanently damaged leg that would shorten his career and affect him for the rest of his life. The taxi driver, George Martin, was convicted of dangerous driving, fined £50 and in default of payment six months imprisonment, and disqualified from driving for 15 years, although by some accounts he served no prison sentence and his driving licence was reinstated in 1969.
The car and other items from the crash were impounded at the local police station until a coroner's inquest could be held. David Harman, a police cadet at the station, who would later become known as Dave Dee of the band Dave Dee, Dozy, Beaky, Mick & Tich, taught himself to play guitar on Cochran's impounded Gretsch. Earlier in the tour, the same guitar had been carried to the car for Cochran by the 12-year-old Mark Feld, later known as Marc Bolan, of the band T. Rex, who would himself die in a car crash in 1977.
A memorial stone commemorating Eddie Cochran was placed on the grounds of St Martin's Hospital, in Bath. The stone was restored in 2010 on the 50th anniversary of his death and can be found in the old chapel grounds at the hospital. A memorial plaque was also placed next to the sundial at the back of the old chapel.
Eddie Cochran was born on October 3rd 1938 in Albert Lea, Minnesota, to Alice and Frank R. Cochran. His parents were from Oklahoma, and he always said in interviews that his parents had some roots in Oklahoma.
Eddie Cochran's family moved to California, in 1952. As his guitar playing improved, he formed a band with two friends from his junior high school. He dropped out of Bell Gardens High School in his first year to become a professional musician. During a show featuring many performers at an American Legion hall, he met Hank Cochran, a songwriter. Although they were not related, they recorded as the Cochran Brothers and began performing together. They recorded a few singles for Ekko Records that were fairly successful and helped to establish them as a performing act. Eddie Cochran also worked as a session musician and began writing songs, making a demo with Jerry Capehart, his future manager. In July 1955, Eddie Cochran's first "solo artist" single was released by Crest Records. It featured "Skinny Jim", now regarded as a rock-and-roll and rockabilly classic. In the spring of 1956, Boris Petroff asked Eddie Cochran if he would appear in the musical comedy film The Girl Can't Help It. Eddie agreed and performed the song "Twenty Flight Rock" in the movie.
In 1957 Eddie Cochran starred in his second film, Untamed Youth, and he had yet another hit, "Sittin' in the Balcony", one of the few songs he recorded that were written by other songwriters (in this case John D. Loudermilk). "Twenty Flight Rock" was written by AMI staff writer Ned Fairchild. Fairchild, who was not a rock and roll performer, merely provided the initial form of the song; the co-writing credit reflects Eddie Cochran's major changes and contributions to the final product.
In February 1957 Liberty Records issued Eddie Cochran's only studio album released during his lifetime, Singin' to My Baby. The album included "Sittin' in the Balcony". There were only a few rockers on this album, and Liberty seemed to want to move Eddie Cochran in a different musical direction, but he refused. In 1957, however, Eddie Cochran seemed to find his stride in the famous teenage anthem "Summertime Blues" (co-written with Jerry Capehart). With this song, Eddie Cochran was established as one of the most important influences on rock and roll in the 1950s, both lyrically and musically. The song, released by Liberty charted at number 8 in 195

7. Eddie Cochran's brief career included a few more hits, such as "C'mon, Everybody", "Somethin' Else", "Teenage Heaven", and his posthumous UK number one hit "Three Steps to Heaven". He remained popular in the US and UK through the late 1950s and early 1960s, and more of his records were posthumous hits, such as "My Way", "Weekend", and "Nervous Breakdown".
Another aspect of Eddie Cochran's short but brilliant career is his work as backup musician and producer. He played guitar on tracks by Ray Stanley, Lee Denson, Baker Knight, Bob Denton, Galen Denny, Don Deal, Troyce Key, Mike Clifford, Paula Morgan, Jody Reynolds, Johnny Burnette, Wynn Stewart, Ernie Freeman, Elroy Peace, Derry Weaver, Eddie Daniels, Jewel Akens, John Ashley, Jack Lewis, Lynn Marshall, Jess Willard, the Holly Twins, Barry Martin, and Al Casey. In 1959 he played lead for Skeets McDonald at Columbia's studios for "You Oughta See Grandma Rock" and "Heart Breaking Mama". In a session for Gene Vincent in March 1958 he contributed his trademark bass voice, as heard on "Summertime Blues". The recordings were issued on the album A Gene Vincent Record Date.
In early 1959 two of Eddie Cochran's friends, Buddy Holly and Ritchie Valens, along with the Big Bopper, were killed in a plane crash while on tour. Eddie Cochran's friends and family later said that he was badly shaken by their deaths, and he developed a morbid premonition that he also would die young. It was shortly after their deaths that he wrote and recorded a song in tribute to them, "Three Stars". He was anxious to give up life on the road and spend his time in the studio making music, thereby reducing the chance of suffering a similar fatal accident while touring. Financial responsibilities, however, required that he continue to perform live, and that led to his acceptance of an offer to tour the United Kingdom in 1960.

song: Somethin' Else by Eddie Cochran