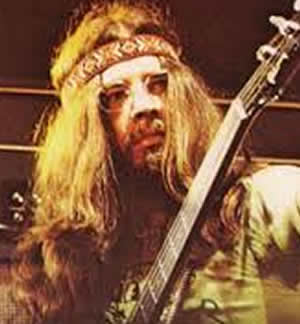 Glen Cornick died aged sixty-seven at home in Hilo, Hawaii, on 28th August 2014 due to congestive heart failure. He is survived by his wife Bridgette, their daughter Molly and their sons Drew and Alex.
Glen Cornick was born on 23rd April 1947 and later attended Barrow-in-Furness Grammar School for Boys and then moved to Blackpool. The first group Glenn Cornick played with was "The Executives", a group that played cover versions of famous songs in clubs and pubs. Later, he joined a soul band called John Evan Smash in which Ian Anderson and guitarist Mick Abrahams were also members. Drummer Clive Bunker who was a friend of Abrahams then joined them to form Jethro Tull.
Glen Cornick toured and recorded with Jethro Tull from late 1967 to late 1970. He played in the three first studio albums of the band, This Was, Stand Up and Benefit, playing an important role in the arranging of the music, being one of the few members of Jethro Tull with some musical learning. During his time with the band, he established his stage persona, with strong virtuosity and remarkable music competence. One of the few live recordings of Glen Cornick with Jethro Tull is the video Nothing is Easy - Live at the Isle of Wight, recorded in 1970 and released in 2004. He was fired from the band, mainly because his lifestyle was more inclined to partying than the other band members.
After leaving Jethro Tull, Glen Cornick played as a session musician for Leigh Stephens on his 1971 album 'And a Cast of Thousands'. In the same year, he formed Wild Turkey, initially with: Graham Williams (guitar), Alan 'Tweke' Lewis (guitar), John "Pugwash" Weathers (ex-Pete Brown & Piblokto!) (drums) and Gary Pickford-Hopkins (ex-Eyes of Blue) on vocals; but Weathers and Williams left to join Graham Bond's Magick before Wild Turkey recorded any material - soon after, Weathers joined the progressive rock band Gentle Giant. They were replaced by Jon Blackmore (guitar and vocals) and Jeff Jones (ex-Man) (drums) who joined Glen Cornick, Tweke and Pickford-Hopkins to record Wild Turkey's first album 'Battle Hymn', which only reached number 193 in The Billboard 200. The band released a second album, Turkey, before splitting up.
Glen Cornick then joined the German band Karthago with whom he recorded just one album 'Rock'N'Roll Testament' before leaving and moving to Los Angeles to form Paris with guitarist Bob Welch (ex-Fleetwood Mac) and Thom Mooney (ex-Nazz) on drums. They recorded an eponymous album Paris in 1975, before Mooney was replaced by Hunt Sales (ex-Todd Rundgren's Runt), and in 1976 recorded Big Towne, 2061. Paris disbanded in 1977.

In 1996, Glen Cornick participated in a Jethro Tull tribute, called To Cry You A Song - A collection of Tull Tales, playing on the songs "Nothing Is Easy", "To Cry You a Song", "New Day Yesterday", "Teacher" and "Living in the Past", together with the former Tull members Clive Bunker, Mick Abrahams and Dave Pegg, together with John Wetton, Glenn Hughes, Robby Steinhardt, Wolfstone and Keith Emerson.
In the early 2000s two live Wild Turkey albums were released, Final Performance (2000) and Live In Edinburgh (2001) and in 2006 the fourth studio album, You and Me in the Jungle, was recorded by Glen Cornick, Pickford-Hopkins, Dyche and Gurl, who had all appeared on earlier albums. They were joined by Graham Williams (ex-Racing Cars) (guitar), John "Pugwash" Weathers (percussion) and Clive Bunker (ex-Jethro Tull) (drums) all of whom had played with Glen Cornick in the past.

Song 'Nothing Is Easy' by Jethro Tull