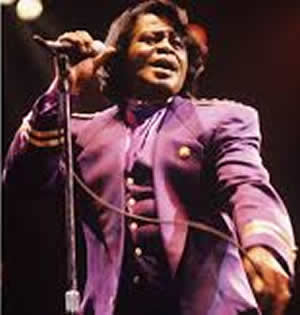 Heart Failure on 25th December 2006. On December 23rd he had been feeling quite unwell and arrived at his dentist's office in Atlanta, Georgia, U.S.A. for dental implant work. During James's visit the dentist observed that James looked weak and dazed. Instead of performing the work, the dentist advised James to see a doctor immediately about his medical condition. The next day James visited the Emory Crawford Long Memorial Hospital in Atlanta for medical evaluation and was admitted for observation and treatment where he remained hospitalized but his condition worsened throughout the day.
On Christmas Day he died at arround 1:45 am E.S.T. from congestive heart failure, brought on by the complications of pneumonia.

After several memorial services and an unusual delay, James Brown's body was finally laid to rest seventy-six days after his death, in a crypt at the home of daughter, Deanna, on Beech Island, South Carolina, U.S.A.

James Joseph Brown was born on May 3rd 1933 in Barnwell, South Carolina,USA to 16-year-old Susie and 22-year-old Joseph "Joe" Gardner Brown in a small wooden shack. His parents were both black but in his autobiography states that he also had Chinese and Native American ancestry. The Brown family lived in extreme poverty in Elko, South Carolina, which was an impoverished town at the time. They later moved to Augusta, Georgia, when James was four or five. His family first settled at one of his aunts' brothels. They later moved into a house shared with another aunt. James Brown's mother eventually left the family after a difficult marriage and moved to New York. James Brown spent long stretches of time on his own, hanging out in the streets and hustling to get by. He managed to stay in school until the sixth grade.
James began singing in talent shows as a young child, first appearing at Augusta's Lenox Theater in 1944, winning the show after singing the ballad "So Long". While in Augusta, James Brown performed buck dances for change to entertain troops from Camp Gordon at the start of World War II as their convoys traveled over a canal bridge near his aunt's home. He learned to play the piano, guitar, and harmonica during this period. Young James became inspired to become an entertainer after hearing "Caldonia" by Louis Jordan and his Tympany Five. In his teen years, James Brown briefly had a career as a boxer. At the age of sixteen he was convicted of robbery and sent to a juvenile detention center in Toccoa. There, he formed a gospel quartet with four fellow cellmates, including Johnny Terry. Stories differ as to how James Brown eventually attained parole. According to one story, Bobby Byrd's family helped to secure an early release, while another version of events had James Brown getting parole after S. C. Lawson, the owner of a car and motor manufacturing company, agreed to sponsor him, with the provision that James Brown promise to pursue a two-year job commitment. He was paroled on June 14th, 1952. Upon his release, he joined a gospel group and had several jobs, working for the Lawson Motor Company and as a janitor at a local school. James Brown and Bobby Byrd reportedly met and became friends following James's release from prison.

y knocked out the singer. In 2002, James Brown appeared in Undercover Brother, playing himself. In 2004, James Brown performed in Hyde Park, London as a support act for Red Hot Chili Peppers concerts.
The beginning of 2005, saw the publication of James Brown's second book, 'I Feel Good: A Memoir of a Life of Soul', written with Marc Eliot. In February and March, he participated in recording sessions for an intended studio album with Fred Wesley, Pee Wee Ellis, and other longtime collaborators. Though he lost interest in the album, which remains unreleased, a track from the sessions, "Gut Bucket", appeared on a compilation CD included with the August 2006 issue of MOJO. He appeared at Edinburgh 50,000 – The Final Push, the final Live 8 concert on July 6, 2005, where he performed a duet with British pop star Will Young on "Papa's Got A Brand New Bag". The previous week he had performed a duet with another British pop star, Joss Stone, on the United Kingdom chat show Friday Night with Jonathan Ross. In 2006, James Brown continued his "Seven Decades of Funk World Tour", his last concert tour where he performed all over the world. His final U.S. performances were in San Francisco on August 20, 2006, as headliner at the Festival of the Golden Gate (Foggfest) on the Great Meadow at Fort Mason. The following day, August 21, he performed at Humboldt State University in Arcata, CA, at a small theatre on campus. His last shows were greeted with positive reviews, and one of his final concert appearances at the Irish Oxegen festival in Punchestown in 2006 was performed for a record crowd of 80,000 people. He played a full concert as part of the BBC's Electric Proms on October 27, 2006, at The Roundhouse, supported by The Zutons, with special appearances from Max Beasley and The Sugababes. James Brown's last televised appearance was at his induction into the UK Music Hall of Fame in November 2006, before his death the following month.