Johnny Cash died aged seventy-one on 12th September 2003 from complications of diabetes while hospitalized at Baptist Hospital in Nashville,Tennessee, U.S.A. It was less than four months after his wife's death. It was suggested that Johnny's health worsened due to a broken heart over June's death. He was buried next to his wife in Hendersonville Memory Gardens near his home in Hendersonville, Tennessee. 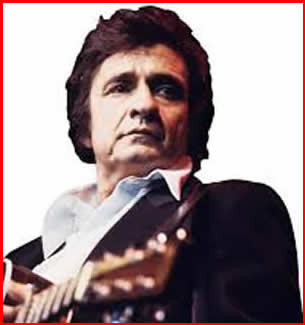 d with Johnny Cash replacing "San Quentin" with "Österåker". In 1976, a further prison concert, this time at Tennessee Prison, was videotaped for TV broadcast and received a belated CD release after Johnny Cash's death as 'A Concert Behind Prison Walls'

In June 2005, Johnny Cash's lakeside home on Caudill Drive in Hendersonville was put up for sale by his estate. In January 2006, the house was sold to Bee Gees vocalist Barry Gibb and wife Linda, and titled to their Florida limited liability company for $2.3 million. The listing agent was Johnny Cash's younger brother, Tommy. On April 10th 2007, during a major restoration of the property by the new owner, Johnny Cash's former home was accidentally destroyed in a spontaneous combustion-ignited fire caused by workers using linseed oil products.

One of Johnny Cash's final collaborations with producer Rick Rubin, 'American V: A Hundred Highways' was released posthumously on July 4th 2006. The album debuted in the number 1 position on the Billboard Top 200 album chart for the week ending July 22nd 2006. On February 23rd 2010, three days before what would have been Johnny Cash's 78th birthday, the Cash Family, Rick Rubin, and Lost Highway Records released his second posthumous record, titled 'American VI: Ain't No Grave'.