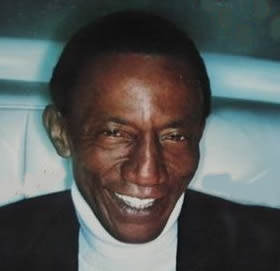 Lee Dorsey died aged sixty-one from emphysema on 1st December 1986, in New Orleans, Louisiana, U.S.A.
Lee Dorsey, birth name Irving Lee Dorsey, was born on 24th December 1924 in New Orleans, Louisiana, and was a childhood friend of Fats Domino before moving to Portland, Oregon, U.S.A. when he was ten years old. He served in the United States Navy in World War II and then began a career in prizefighting. Boxing as a lightweight in Portland in the early 1950s, he fought under the name Kid Chocolate and was reasonably successful. He retired from boxing in 1955 and returned to New Orleans, where he opened an auto repair business as well as singing in clubs at night.

His first recording was "Rock Pretty Baby/Lonely Evening" on Cosimo Mattasa's Rex label, in 1958. This was followed by the Allen Toussaint-produced "Lottie Mo/Lover of Love", for the small Valiant label in late 1960. These efforts were not successful, but in 1960 he was discovered by A&R man Marshall Sehorn, who secured him a contract with Fury Records, owned by Bobby Robinson. After meeting songwriter and record producer Allen Toussaint at a party, he recorded "Ya Ya", a song inspired by a group of children chanting nursery rhymes. It went to number seven on the Billboard Hot 100 in 1961, sold over one million copies, and was awarded a gold disc. Although the follow-up "Do-Re-Mi" also made the charts, later releases on Fury were not successful. Lee Dorsey returned to running his repair business, but also released singles on the Smash and Constellation labels in 1963 and 1964.

He was then approached again by Allen Toussaint, and recorded Toussaint's song "Ride Your Pony" for the Amy label, a subsidiary of Bell Records. The song reach

ed number seven on the Rythm&Blues chart in late 1965, and he followed it up with "Get Out of My Life, Woman", "Working in the Coal Mine" – his biggest pop hit – and "Holy Cow", all of which made the pop charts in both the US and the UK. Lee Dorsey toured internationally, and also recorded an album with Allen Toussaint, The New Lee Dorsey in 1966. In 1970 Lee Dorsey and Allen Toussaint collaborated on the album 'Yes We Can'; the title song was Lee's last entry in the US singles chart. It was later a hit for the Pointer Sisters under the title, "Yes We Can Can". With declining sales, Lee Dorsey then returned to his auto repair business.
In 1976 Lee Dorsey appeared on the album 'I Don't Want to Go Home' by Southside Johnny and the Asbury Jukes, which led to more recordings on his own with ABC Records, including the album 'Night People'. In 1980, he opened for English punk band The Clash on their US concert tour, and also toured in support of James Brown and Jerry Lee Lewis.

song:'Working In A Coalmine'
by Lee Dorsey