MarcBolan died aged twenty-nine on 16th September 1977, just two weeks before his thirtieth birthday. He was a passenger in a purple Mini 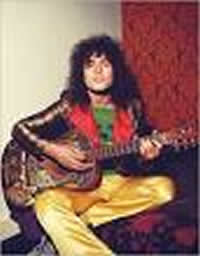 GT driven by Gloria Jones as they headed home from Mortons drinking club and restaurant in Berkeley Square. Gloria lost control of the car: it struck a steel reinforced chain link fence post and came to rest against a sycamore tree after failing to negotiate a small humpback bridge near Gipsy Lane on Queens Ride, Barnes, southwest London. Neither occupant was wearing a seat belt. Marc Bolan was killed instantly, while Gloria Jones suffered a broken arm and broken jaw and spent time in hospital.
At Marc Bolan's funeral, attended by David Bowie, Rod Stewart, Tony Visconti, and Steve Harley, a swan-shaped floral tribute was displayed outside the service in recognition of his breakthrough hit single "Ride a White Swan". His funeral service was at the Golders Green Crematorium, in north London, where his ashes were buried. The car crash site has subsequently become a shrine to his memory, where fans leave tributes beside the tree. In 2013, the shrine was featured on the British BBC Four series Pagans and Pilgrims: Britain's Holiest Places. The site, referred to as Bolan's Rock Shrine, is owned and maintained by the T. Rex Action Group.
Marc Bolan never learned to drive, fearing a premature death. Despite this fear, cars or automotive components are at least mentioned in, if not the subject of, many of his songs. He also owned a number of vehicles, including a white 1960s Rolls-Royce that was loaned by his management to the band, Hawkwind, on the night of his death.

In the same year Marc appeared in Ringo Starr's film Born to Boogie, a documentary showing a concert at Wembley Empire Pool on 18 March 1972. Mixed in were surreal scenes shot at John Lennon's mansion in Ascot and a session with T. Rex joined by Ringo Starr on a second drum kit and Elton John on piano. At this time T. Rex record sales accounted for about six percent of total British domestic record sales. The band was reportedly selling 100,000 records a day; however, no T. Rex single ever became a million-seller in the UK, despite many gold discs and an average of four weeks at the top per number one hit.
Eventually, the vintage T. Rex line-up disintegrated. Legend left in 1973 and Finn in 1975 and Marc Bolan's marriage came to an end because of his affair with backing singer Gloria Jones who gave birth to his son Rolan in 1975. He spent a good deal of his time in the US during this period, continuing to release singles and albums which, while not reaching major commercial success, were full of unusual lyrics and sometimes eccentric musical experiments. Marc Bolan was not living healthily and began to gain weight, though he subsequently improved and continued working, producing at least one album every year.
In early 1977, Marc Bolan got a new band together, released a new album, Dandy in the Underworld, and set out on a fresh UK tour, taking along punk band the Damned as support to entice a young audience who did not remember his heyday.
Later in 1977, Granada Television commissioned Marc Bolan to front a six-part series called Marc in which he hosted a mix of new and established bands and performed his own songs. By this time Marc Bolan had lost weight, appearing as trim as he had during T. Rex's earlier heyday. The show was broadcast during the post-school half-hour on ITV earmarked for children and teenagers and it was a big success.