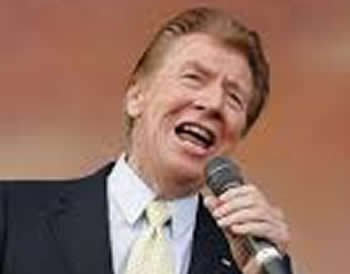 Max was born Walter William Bygraves on 16th October nineteen twenty-two in Rotherhithe, London, U.K. to Henry and Lillian Bygraves and he grew up in poverty in a two-room council flat with his five siblings, his parents and a grandparent.
His father was a professional flyweight boxer, known as Battling Tom Smith, and a casual dockworker. Brought up Catholic, Max attended St Joseph's School, Paradise Street, Rotherhithe, and sang with his school choir at Westminster Cathedral.

Max left school aged fourteen and worked at the Savoy Hotel in London as a pageboy, but was let go apparently due to being too tall. He later put some of his success as a variety performer down to his physique. He was six feet and three inches tall, but weighed only thirteen stones in adult life.
He then became a messenger for an advertising agency in Fleet Street, before serving as a fitter in the Royal Air Force in the Second World War and working as a carpenter. He changed his name to Max Bygraves in honour of comedian Max Miller.

In the 1950s and 1960s, Max Bygraves appeared as a guest on several television variety programmes, both in the UK and United States. These included Ed Sullivan, Jack Benny and Jackie Gleason, in America, but his place as a broadcasting icon was founded, along with several fellow artists, by appearing as guest "tutor" to Peter Brough's ventriloquist dummy, Archie Andrews, in the long running BBC radio show 'Educating Archie'.

He was the subject of This Is Your Life in 1961 when he was surprised by Eamonn Andrews while rehearsing his new show, Do Re Mi at London’s Prince of Wales Theatre.
From 1983 to 1985, Max Bygraves hosted Family Fortunes, taking over from his friend and fellow comedian Bob Monkhouse.

He would later be succeeded as host in 1987 by Les Dennis.
In 1982, Max was made an Officer of the Order of the British Empire.