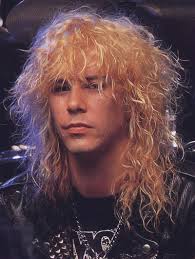 Ole Beich died aged thirty-six on 16th October 1991, drowning in Sankt Jørgens Lake in the center of Copenhagen, Denmark. Not long before, on August 19th, Guns N' Roses had performed in the city. His family believe that he became depressed after leaving Guns N' Roses in 1985 and was heavily abusing drugs before returning to Denmark in 1988. Heroin, and a blood alcohol content of .148, are thought to have contributed to his drowning, but his family still believes it was suicide.
Ole Beich was buried in Esbjerg next to his father Aksel.

Ole Beich was born on January 1st 1955 in the city of Esbjerg in Denmark. In his youth, he achieved a degree of fame amongst local musicians and fans. He played guitar with several Danish bands, and recorded an album in 1979 with a band called Rock Nalle & The Flames. He was also a member of Mercyful Fate for a brief time, before deciding to move to Los Angeles in pursuit of a career in music.

Ole Beich played one show in early 1985 before quitting the group and was eventually replaced by Duff McKagan.