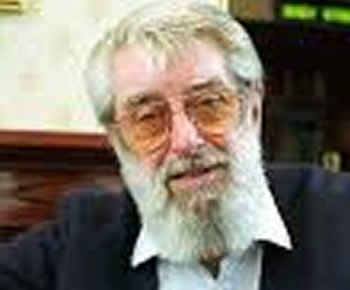 Ronnie Drew was born in County Dublin in 1934 and was educated at CBS Eblana. Despite his dislike of education, he was considered the most intelligent in his class by school-mate and future Irish film censor, Sheamus Smith but Ronnie did sing as a boy soprano before his voice broke.
In the 1950s, Ronnie Drew moved to Spain to teach English and learn Spanish and flamenco guitar. His interest in folk music began at the age of nineteen and when he returned to Ireland, he performed in the Gate Theatre with John Molloy and soon went into the music business full-time.
In 1962, Ronnie founded the Ronnie Drew Dubliners with Luke Kelly, Barney McKenna and Ciarán Bourke. They soon changed their name to The Dubliners—with John Sheahan joining shortly afterwards to form the definitive line-up—and quickly became one of the best known Irish folk Dublinerss. They played at first in O'Donoghue's Pub in Merrion Row, Dublin where they were often accompanied by Mary Jordan on the spoons and vocalist Ann Mulqueen, a friend of McKenna's. Mary Jordan's mother, Peggy Jordan, introduced them to the Abbey Tavern in Howth, which became a regular Monday night venue for the emerging stars when they also played across the road in the Royal Hotel.
Ronnie Drew left the Dubliners in 1974 but rejoined again in 1979, then left for good in 1995, though he did reunite with the Dubliners in 2002 for a 40th anniversary celebration. Ronnie made several television appearances with the Dubliners between 2002–05.
From 1995 onwards, Ronnie Drew pursued a solo career. He recorded with many artists, including Christy Moore, The Pogues, Antonio Breschi, Dropkick Murphys, Eleanor Shanley and others. He did a number of "one-man shows"—he was accompanied by various guitarists—during this period, such as Songs and Stories, Ronnie, I Hardly Knew Ya and Ronnie. These shows consisted of stories about people including Brendan Behan, Patrick Kavanagh and Seán O'Casey, as well as Ronnie singing their songs.
Ronnie fronted a campaign to encourage the use of Dublin's light-rail infrastructure (the DART) and, before that, the "My Dublin" ads for radio stations 98FM and FM104. He narrated a re-telling of the great

Irish Myths and Legends—scripted by Steven Byrne—over a six CD set in 2006. He also narrated the stories of Oscar Wilde in his distinctive voice for a series released on CD by the News of the World newspaper. Both were re-released as CD box sets in 2010.
In August 2006, Ronnie Drew was honoured in a ceremony where his hand prints were added to the "Walk of Fame" outside Dublin's Gaiety Theatre.

song:'Seven Drunken Nights' by The Dubliners