Ronnie James Dio died aged sixty-seven of metastasized stomach cancer on May 16th 2010. During the previous November his wife 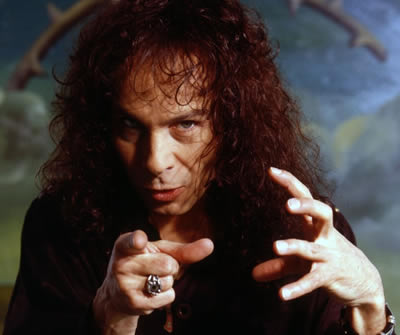 announced that Ronnie had been diagnosed with stomach cancer and was being treated at the M.D. Anderson Cancer Center in Houston, Texas, but that he would be back on stage when recovered. On May 4th 2010, his band Heaven & Hell announced they were canceling all summer dates as a result of Ronnie's ill health. His last live performance was with Heaven & Hell on August 29th 2009, in Atlantic City, New Jersey, U.S.A.

A public memorial service was held on 30th May 2010 at The Hall of Liberty, Forest Lawn, Hollywood Hills, Los Angeles. The hall was filled to capacity, with many more fans sitting outside the hall watching the memorial on multiple giant screens. Friends, family, and former and current band mates of Ronnie Dio gave speeches and performed including Rudy Sarzo, Geoff Tate, John Payne, Glenn Hughes, Joey Belladonna, and Heaven & Hell keyboard player, Scott Warren. On the screen was an accompanying documentary covering Dio's career from his early days with Elf to his final project with Heaven & Hell.

Ronnie James Dio was born Ronald James Padavona in Portsmouth, New Hampshire, U.S.A. to Italian-American parents from Cortland, New York. Ronnie James Dio's family moved to Portsmouth from Cortland as part of his father's service in the U.S. Army during World War II and they resided there for only a short time before returning to Cortland. Ronnie James Dio listened to a great deal of opera while growing up, and was influenced vocally by American tenor Mario Lanza. His first formal musical training began at age five while learning to play trumpet. Growing up, Ronnie James Dio participated in his high school's band program and was one of the youngest members selected to play in the school's official Dance Band. It was also during high school that Ronnie James Dio formed his first rock-n-roll group, "The Vegas Kings." He soon changed the name of his band to "Ronnie and the Rumblers" and shortly thereafter to "Ronnie and the Red Caps." Though Ronnie James Dio began his rock-n-roll career on trumpet, he quickly added singing to his skill-set and also assumed bass guitar duties for the groups.

Ronnie James Dio graduated from Cortland High School in nineteen sixty. Though it was said in a later interview that he was allegedly offered a scholarship to the prestigious Juilliard School of Music, he did not take the offer due to his continuing interest in rock-n-roll music. Ronnie James Dio instead attended the University at Buffalo to major in pharmacology. He played trumpet in the university's concert band. However, he only attended university from nineteen sixty to nineteen sixty-one and did not graduate.

Despite being known for his powerful singing voice, Ronnie James Dio claimed to have never received any vocal training. He instead attributed his singing ability to the use of breathing techniques he learned while playing trumpet.

In nineteen fifty-eight, the band again changed their name from Ronnie & The Rumblers to Ronnie and the Redcaps. Musci left the band in nineteen sixty, and a new guitarist, Dick Botoff, joined the lineup. The Redcaps released two singles: The first single was "Conquest"/"Lover" with the A-side being an instrumental reminiscent of The Ventures and the B-side featuring DeWolfe on lead vocals. The second single was "An Angel Is Missing"/"What'd I Say" which featured Ronnie James Dio on lead vocals for both tracks.

Explanations vary for how Padavona adopted the stage name "Dio". One story is that Dio was a reference to mafia member Johnny Dio. Another has it that Padavona's grandmother said he had a gift from God and should be called "Dio" which means "God" in Italian, although this was debunked by Padavona's widow, Wendy Dio, in a February 2017 interview. Ronnie first used the name on a recording in nineteen sixty, when he added it to the band's second release on Seneca. Soon after that the band modified their name to Ronnie Dio and the Prophets. The Prophets lineup lasted for several years, touring throughout the New York region and playing college fraternity parties. They produced one single for Atlantic and one album. Some of the singles, such as "Mr. Misery", released on Swan, were labeled as being by Ronnie Dio as a solo artist even if the rest of the Prophets contributed to the recording. The group released several singles during the following years until early nineteen sixty-seven. Ronnie James Dio continued to use his birth name on any songwriting credits on those releases.

In late nineteen sixty-seven, Ronnie Dio and the Prophets transformed into a new band called The Electric Elves and added a keyboard player. After recovering from a deadly car accident in February nineteen sixty-eight, which killed guitarist Nick Pantas and put Dio and the other band members briefly in hospital, the group shortened its name to The Elves and used that name until mid nineteen seventy-two, when it released its first proper album under the name Elf. Over the next few years, the group went on to become a regular opening act for Deep Purple. Elf recorded three albums until the members' involvement recording the first Rainbow album in early nineteen seventy-five resulted in Elf disbanding.

Dio's vocals caught the ear of Deep Purple guitarist Ritchie Blackmore in the mid-1970s, who was planning on leaving then due to creative differences over the band's new direction. Blackmore invited Dio along with Gary Driscoll to record two songs in Tampa, Florida in December 1974. Richie Blackmore stated in nineteen eighty-three that he'd left Deep Purple because he'd met up with Ronnie Dio who was was so easy to work with and that Ronnie was originally just going to do one track of a solo LP, but they ended up doing the whole LP in three weeks, which he was very excited about. Being satisfied with the results, Richie Blackmore decided to recruit more of Elf's musicians and form his own band, initially known as 'Ritchie Blackmore's Rainbow'. They released the self-titled debut album 'Ritchie Blackmore's Rainbow' in early nineteen seventy-five. After that, Ronnie Dio recorded two more studio albums (Rising and Long Live Rock 'n' Roll) and two archival live albums, Live in Munich 1977 and Live in Germany 1976, with Richie Blackmore. During his tenure with Rainbow, Ronnie Dio and Blackmore were the only constant members. Ronnie Dio is credited on those albums for all lyrical authorship as well as collaboration with Blackmore on musical arrangement. Ronnie Dio and Blackmore split, with Blackmore taking the band in a more commercial direction, with Graham Bonnet on vocals and the album 'Down to Earth'

Ronnie Dio left Rainbow in nineteen seventy-nine and soon joined Black Sabbath, replacing the fired Ozzy Osbourne. Ronnie Dio met Sabbath guitarist Tony Iommi by chance at The Rainbow on Sunset Strip in Los Angeles in nineteen seventy-nine. Both men were in similar situations, as Dio was seeking a new project and Iommi required a vocalist. Ronnie said of the encounter that it must have been fate, because they connected so instantly. The pair kept in touch until Ronnie arrived at Iommi's Los Angeles house for a relaxed, getting-to-know-you jam session. On that first day the duo wrote the song, "Children of the Sea", which would appear on the Heaven and Hell album, the first the band recorded with Ronnie Dio as vocalist and released in nineteen eighty.

The follow-up album, 'Mob Rules', featured new drummer Vinny Appice. Personality conflicts began emerging within the band. Tony Iommi recalled that Ronnie came into the band and he was doing whatever they told him, basically because he wanted the gig. In nineteen eighty-two, conflict arose over the mixing of the Live Evil album. Iommi asserted that the album's engineer began complaining to him that he would work all day long on a mix, only to have Ronnie Dio return to the studio at night to "do his own mix" in which his vocals were more prominent. This was denied by Ronnie Dio. The conflict led to Ronnie Dio and Appice ultimately quitting the band later that year.

In nineteen ninety-two Ronnie Dio briefly returned to Black Sabbath to record the Dehumanizer album. The album was a minor hit, reaching the Top 40 in the United Kingdom and number 44 on the Billboard 200. The single "Time Machine" was featured in the movie Wayne's World, the tenth highest-grossing film of nineteen ninety-two. Soon Ronnie Dio and Appice again left the band, citing an inability to work with Iommi and Butler.

Wanting to continue together as a band, Ronnie Dio and Appice formed Dio, the band, in nineteen eighty-two. Vivian Campbell played guitar and Jimmy Bain was on bass; the latter of whom Ronnie Dio had known since the old Rainbow days. Their debut album, Holy Diver, included the hit singles "Rainbow in the Dark" and "Holy D

The band added keyboardist Claude Schnell and recorded two more full-length studio albums, The Last in Line and Sacred Heart. A notable live recording, A Special From The Spectrum, was filmed during the band's second world tour and released in VHS format only. The band changed members over the years, eventually leaving Ronnie Dio as the only original member in 1990. Except for a few breaks, Dio, the band, were always touring or recording. They released ten albums, with Master of the Moon being the last one, recorded in 2004.

On January 17, 2007, Ronnie Dio was inducted into the Rock Walk of Fame at Guitar Center on Hollywood's Sunset Boulevard. Ronnie Dio and his first wife, Loretta Berardi, adopted a son, now the novelist Dan Padavona. After divorcing Loretta he married Wendy Gaxiola who also served as his manager. Ronnie James Dio remained married to Wendy until his death.