Louise Armstrong died of a heart attack in his sleep on 6th July 1971, a month before his seventieth birthday and in his home in Corona, Qu 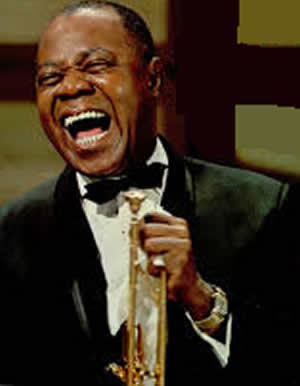 eens, New York City, U.S.A. He was interred in Flushing Cemetery, Flushing, in Queens, New York City. His honorary pallbearers included Bing Crosby, Ella Fitzgerald, Dizzy Gillespie, Pearl Bailey, Count Basie, Harry James, Frank Sinatra, Ed Sullivan, Earl Wilson, Alan King, Johnny Carson and David Frost. Peggy Lee sang The Lord's Prayer at the services while Al Hibbler sang "Nobody Knows the Trouble I've Seen" and Fred Robbins, a long-time friend, gave the eulogy. Against his doctor's advice, Louise had played a two-week engagement in March nineteen seventy-one at the Waldorf-Astoria's Empire Room. At the end of it he was hospitalized for a heart attack. He was released from the hospital the following May, and soon resumed practicing his trumpet playing, whilst hoping to get back on the road,
Louise Armstrong was born in New Orleans on 4th August 1901 to Mary Albert and William Armstrong. William Armstrong abandoned the family shortly after Louis was born. Josephine, Louis' maternal grandmother, raised him until he was about five, after which he returned to Mary Albert. He spent his youth in poverty, in a rough neighborhood known as the Battlefield. At the age of six he began attending the Fisk School for Boys, where he acquired literacy and gained early exposure to music. Schools were racially segregated in New Orleans. Fisk was located in his neighborhood and enrolled African-American children. During his school years, he continued to bring in money delivering coal and other odd jobs working for the Karnoffskys, a family of Lithuanian Jews. He sold coal for a nickel per bucket, in many cases, to the brothels in Storyville. Making the rounds with the Karnoffsky family while delivering coal exposed Louis to music by spasm bands, and the house musicians playing at brothels and dance halls.
The Karnoffskys took Louise in and treated him like family; knowing he lived without a father, they fed and nurtured him. Louise Armstrong wore a Star of David pendant for the rest of his life. Morris Karnoffsky advanced young Louis $2 toward the purchase of a $5 cornet from a pawn shop, then cleaned and oiled it. In general, the family encouraged Louis' musical pursuits.
Louise dropped out of school during fifth grade, at age eleven. At around the same time, Mary Albert moved to a one-room house on Perdido Street with Louis, her daughter Lucy, and her common-law husband, Tom Lee. They lived next door to Mary Albert's brother Ike and his two sons. Louise joined a quartet of boys who sang in the streets for money. He also started to get into trouble.
Louise was arrested on 31st December 1912 for firing a revolver into the air. He had gone to sing on the streets for money, and had taken his stepfather's handgun, without permission. The round fired was a blank. Louise was held overnight at the New Orleans Juvenile Court. The following day, Louise was sentenced to detention at the Colored Waif's Home. Lodgings and meals there were basic since there were no mattresses and they often ate only bread and molasses.
At the Colored Waif's home, Louise developed his cornet playing skills by playing in the band with other residents and Professor Peter Davis provided discipline and provided musical training to the otherwise self-taught Louise Armstrong; eventually, making Louise the band leader. The home band played around New Orleans and the thirteen-year-old Louis began to draw attention for his cornet playing, launching him onto a musical career.
In 1914, Louise was released into the custody of his father and his new stepmother, Gertrude. He lived in their household, with two stepbrothers, for several months. When Gertrude gave birth to a daughter, however, Louis' father no longer welcomed him, so he returned to live with his birth mother, Mary Albert. The house was so cramped that he had to sleep in the same bed with his mother and sister. His mother still lived in the same part of the Battleground neighborhood, which left him exposed to old temptations. But Louise continued to seek work as a musician until he found his first dance hall job at Henry Ponce's, a club owner with ties to organized crime. Louise met the very tall drummer Black Benny, who became his protector and guide.
Louise played in brass band parades in New Orleans. He also took the opportunity to take in the music of local musicians, such as Kid Ory, and also his idol, "King" Oliver. Louise eventually received an invitation to go to New York City to play with the Fletcher Henderson Orchestra, the top African-American band of the time. Louise then switched to the trumpet to blend in better with the other musicians in his section.

Louise quickly adapted to the more tightly controlled style of Henderson, playing trumpet and even experimenting with the trombone. The other members quickly took up Louise's emotional, expressive pulse. Soon his act included singing and telling tales of New Orleans characters, especially preachers. The Henderson Orchestra was playing in prominent venues for white-only patrons, including the famed Roseland Ballroom, featuring the arrangements of Don Redman. Duke Ellington's orchestra would go to Roseland to catch Louise's performances and young horn men around town tried in vain to outplay him.
During this time, Louise Armstrong made many recordings on the side, arranged by an old friend from New Orleans, pianist Clarence Williams; these included small jazz band sides with the Williams Blue Five and a series of accompaniments with blues singers, including Bessie Smith, Ma Rainey, and Alberta Hunter.

song: 'All The Time in the World' by The Louise Armstrong