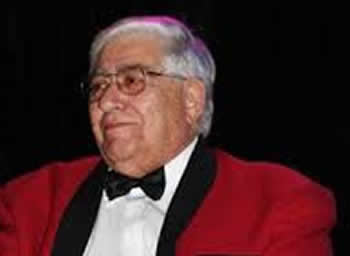 Born in South Philadelphia, Pennsylvania, U.S.A. as John Andrew Grande, on 14th January, 1940, Johnny Grande initially played piano and accordion with Bill Haley and the Saddlemen, later known as Comets, from 1949 to 1962-63. One of his jobs was to keep track of musical arrangements for the group as he was one of the few members who could read sheet music.
Johnny Grande and steel guitarist Billy Williamson were both members of the country band, Southern Swingsters before convincing Bill Haley to start a new group, the Saddlemen in 1949.

Johnny Grande was one of the original business partners who formed the Saddlemen, the other partners being Bill Haley himself and steel guitarist Billy Williamson. During the Labor Day weekend of 1952, the Saddlemen, realizing that their musical style was moving away from country and western decided to change their name to The Comets. Although primarily a piano player, Johnny Grande performed on accordion during most live shows as it was easier to transport than a piano, plus the hand-held instrument allowed him to participate more directly in the band's acrobatic instrumentals, such as "Rudy's Rock".

Johnny Grande was one of the musicians involved in the classic 1954 recording of "Rock Around the Clock". He also appeared with the band in most of their motion picture appearances, including Rock Around the Clock and Don't Knock the Rock. He left the group by or before early 1963 following a tour of Germany.
In 1987, Johnny Grande reunited with several other members of the nineteen-fifties Comets and he continued to tour the world, perform and record with the group for almost another twenty years.