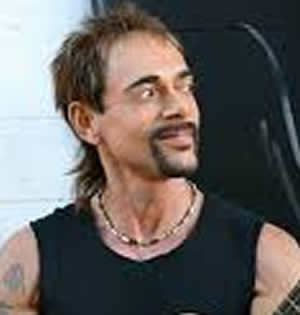 is home in California of a heart attack caused by Atherosclerosis. He is survived by his daughters Hannah and Jasmine Fraser.
Andy Fraser was born in the Paddington area of Central London and started playing the piano at the age of five. He was trained classically until twelve, when he switched to guitar. By thirteen he was playing in East End, West Indian clubs and after being expelled from school in 1968 at the age of 15, enrolled at Hammersmith College of Further Education. There, another student, Sappho Korner, introduced him to her father, pioneering blues musician and radio broadcaster Alexis Korner, who became a father figure to him. Shortly thereafter, upon receiving a telephone call from bandleader John Mayall who was looking for a bass player, Alexis Korner suggested Andy; still only fifteen, now joining a professional band to be earning £50 a week.
Alexis Korner was also instrumental in Andy Fraser's next move, to the influential band Free, which consisted of Paul Rodgers (vocals), Paul Kossoff (guitar) and Simon Kirke (drums). Andy Fraser produced and co-wrote the song "All Right Now" with Rodgers, a No. 1 hit in over 20 territories and recognised by ASCAP in 1990 for garnering over 1,000,000 radio plays in the United States by late 1989. In October 2006, a BMI London Million-Air Award was given to Paul Rodgers and Andy Fraser to mark over 3 million radio and television plays of "All Right Now". Simon Kirke later recalled: "'All Right Now' was created after a bad gig in Durham. We finished our show and walked off the stage to the sound of our own footsteps. The applause had died before I had even left the drum riser. It was obvious that we needed a rocker to close our shows. All of a sudden the inspiration struck Andy and he started bopping around singing 'All Right Now'. He sat down and wrote it right there in the dressing room. It couldn’t have taken more than ten minutes
Andy Fraser also co-wrote two other hit singles for Free, "My Brother Jake" and "The Stealer". Free initially split in 1971, and Andy Fraser formed a trio, Toby, with guitarist Adrian Fisher (later with Sparks), and drummer Stan Speake. Material was recorded but not released, and Andy Fraser re-joined Free in December 1971. He left for the second time in June 1972.
After leaving Free, Andy Fraser formed Sharks with vocalist Snips (later Baker Gurvitz Army), guitarist Chris Spedding and drummer Marty Simon. Despite being well received by the critics, especially for Spedding's tasteful guitar work, Andy Fraser left after their debut album, First Water.
He then formed the Andy Fraser Band, a trio with Kim Turner on drums and Nick Judd on keyboards. They released two albums, Andy Fraser Band and In Your Eyes, both in 1975, before that also folded. Attempts to form a band with Frankie Miller came to nothing, and Fraser relocated to California to concentrate on songwriting. He crafted hits for Robert Palmer, Joe Cocker, Chaka Khan, Rod Stewart and Paul Young.
Andy Fraser's most famous compositions remain "All Right Now" and "Every Kinda People", which Robert Palmer recorded in 1978 for his Double Fun album.
In 1984, Andy Fraser released another album of his own. Fine, Fine Line featured ex-Back Street Crawler drummer Tony Braunagel, Bob Marlette (keyboards), Michael Thompson (guitar) and David Faragher (bass), with Andy contributing vocals.
Having been diagnosed with HIV, Andy was later diagnosed with Kaposi's sarcoma, a form of cancer that had been very rare until the onset of the AIDS epidemic. This time-line was called into question by Andy Fraser's subsequent revelation that he was homosexual. He played bass with former Free colleague Paul Rodgers at Woodstock '94, but otherwise kept a low profile until 2005, when a new release, Naked and Finally Free, appeared. At the time of the new album's release, Andy Fraser was interviewed by Dmitry M. Epstein for the DME website and revealed: “To be quite honest, I never thought of myself as a bass-player. I actually only used the bass-guitar because the other kids in our school-band wanted to be the singer, or drummer, or guitarist. I have always thought of myself as doing whatever was necessary to make the whole thing work. I’m happy adding piano, or tambourine, or anything that helped”. In early 2006, writing for Vintage Guitar magazine, Tom Guerra conducted a comprehensive interview with AndyFraser, covering his career, influences and instruments and, in April, Fraser responded to the revival of interest in his music

by announcing two rare live shows at Southern California's Temecula Community Arts Theatre on 4th May. The shows, accompanied by an eight-piece band, were his first live performances since the 1994 Woodstock reunion.
In 2008, he wrote and sang the song "Obama (Yes We Can)", to support the campaign to elect Barack Obama as president of the United States.
Founded by Andy Fraser, Mctrax International was incorporated as Mctrax International Corporation in California in 2005. Headquartered in southern California, Mctrax International and its subsidiaries MctraxMedia, MctraxMotion and MctraxStudios were originally created as an outlet for his prolific songwriting.
In May 2010, Andy Fraser was interviewed for BBC Two's documentary series titled Rock 'n' Roll. The project includes a five-part documentary, narrated by British music show anchor-man Mark Radcliffe plus online and radio content. "The documentary aims to explain the success of some of the greatest bands of the past 50 years, including the Who, the Police, the Doors, Bon Jovi and the Foo Fighters".
In mid-2013, Andy Fraser played a supporting role as bassist in the band of protege Tobi Earnshaw for a short series of UK dates. Accompanying Tobi Earnshaw and Andy Fraser was a veteran ally, guitarist Chris Spedding. Andy produced and mentored Earnshaw on a number of album releases.

<<go to top>>
Do you like this website? If so, then please copy and email the link: http://www.rockapaedia.com
to your friends, colleagues and aquaintances. Thankyou.

song:'I Wanna Be There ' by The Andy Fraser Band