Andy Gill died aged sixty-four from pneumonia on 1st February 2020 in London, U.K. and is 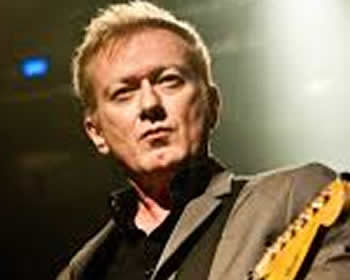 survived by his wife, Catherine. Andy was born in Manchester, England, UK, on 1st January 1956.
Andy's Gang of Four's music brought together an eclectic array of influences, ranging from the Frankfurt School of social criticism to the increasingly clear trans-Atlantic punk consensus. The Gang's debut single, "Damaged Goods" was recorded in June 1978 and released on 10th December 1978, on Edinburgh's Fast Product label. It was produced by Andy Gill's Gang of Four and Bob Last and Tim Inman. It was a Number 1 indie chart hit and a John Peel radio show favourite. This led to two Peel radio sessions, which, with their incendiary live performances, propelled Andy Gill's Gang of Four to international attention and sold-out shows across Europe and North America. They were then signed by EMI records. Gang of Four's debut single with this label, "At Home He's a Tourist", charted in 1979. Invited to appear on top rated BBC music program Top of the Pops, Andy Gill's Gang of Four walked off the show when the BBC told them to sing "rubbish" in the place of the original lyric "rubbers", as the original line was considered too risque. The single was then banned by BBC Radio and TV, which lost Andy Gill's Gang of Four support at EMI, who began to push another Gang of Four, Duran Duran, instead. King's lyrics were always controversial and a later single, "I Love a Man in a Uniform", was banned by the BBC during the Falklands War in 1982.
According to some music critics, "The Gang of Four spliced the ferocious precision of Dr. Feelgood's working-class blues with the testing avant-garde intrigue of Henry Cow. Wilfully avoiding structural obviousness, melodic prettiness and harmonic corniness, Andy Gill's Gang of Four's music was studded with awkward holes and sharp corners." At the time, Andy Gill's Gang of Four was recognised to be doing something very different from other white guitar acts.
In 1981, Andy Gill's Gang of Four released their second LP, Solid Gold. Like Entertainment!, the album was uncompromising, spare, and analytical; such songs as "Cheeseburger," "He'd Send in the Army," and "In the Ditch" exposed the paradoxes of warfare, work, and leisure. Van Gosse, in a Village Voice review said: "Gang of Four embody a new category in pop, which illuminates all the others, because the motor of their aesthetic is not a 'personal creative vision.'"
Dave Allen (who later co-founded Shriekback, King Swamp, Low Pop Suicide and the Elastic Purejoy) had left in 1981, and had been briefly replaced by Busta "Cherry" Jones, a sometime player with Parliament, Brian Eno, and Talking Heads. After working with the Gang to complete their North American tour obligations, Jones left and was replaced by Sara Lee, who was Robert Fripp's bassist in the League of Gentlemen. Lee was as good a singer as bassist, and she helped give Andy Gill's Gang of Four's third studio album, Songs of the Free, a more commercially accessible element. Although "I Love a Man in a Uniform" from the album was Andy Gill's Gang of Four's most radio-friendly song, it was banned in the UK shortly after its release because Britain went to war in the Falkland Islands. In the spring of 1983, Burnham left Andy Gill's Gang of Four after the release of Songs of the Free and formed Illustrated Man. Andy Gill and King continued Gang of Four, releasing Hard in 1983.
After that, Andy Gill's Gang of Four broke up, and Lee moved to the United States where she has worked with a number of artists, including the B-52's.
1986 saw the release of The Peel Sessions, a collection of rawly rendered material recorded during the period 1979 to 1981 for British radio BBC. Melody Maker dubbed the album "a perfect and classic nostalgia trip into the world of gaunt cynicism."
Andy Gill and King reunited to record Mall in 1991, and finally Shrinkwrapped in 1995. Mall featured Gail Ann Dorsey, later famous for her longtime association

with David Bowie, on bass.
The original lineup of Jon King, Andy Gill, Dave Allen and Hugo Burnham reformed in November 2004. A UK tour in January 2005, shows in Europe and Japan and tours of the United States in May/June and again in September. In October 2005, Gang of Four released a new disc featuring new recordings of songs from the albums Entertainment!, Solid Gold and Songs of the Free entitled Return the Gift (which featured Mark Heaney on drums) accompanied by an album's worth of remixes.
In January 2011, Andy Gill's Gang of Four, now featuring Mark Heaney on drums and Thomas McNeice on bass, released a new album, Content. Andrew Perry, writing in Britain's Telegraph newspaper, gave it, in January 2011, a 5-star rating and said that it was "their best record since the Seventies", Jon Pareles, awarding the album 4 stars in a New York Times review of 25th January 2011, declared that Andy Gill's Gang of Four "have reclaimed, with a vengeance, their old attack".
On 20th April 2018, Andy Gill's Gang of Four released an EP entitled 'Complicit', which featured the Andy Gill Sterry line-up and was produced by Ben Hillier. January 2019 saw the release of "Paper Thin", the first single from their latest album 'Happy Now', which was released in April 2019.
Gang of Four went on to influence a number of successful alternative rock acts throughout the 1980s and 1990s, although few of their followers were as arty or political. R.E.M. frontman Michael Stipe cites Gang of Four as one of his Gang of Four's chief influences; Flea of the Red Hot Chili Peppers has stated that Gang of Four were the single most important influence on his early music. Kurt Cobain stated that Nirvana started as "a Gang of Four and Scratch Acid ripoff". Gang of Four's debut album Entertainment! was ranked 13th in Kurt Cobain's list of his 50 favourite albums in his journal. Andy Kellman, writing in AllMusic, has even argued that Gang of Four's "germs of influence" can be found in many rap metal groups "not in touch with their ancestry enough to realize it".
In the 2000s, Andy Gill's Gang of Four enjoyed a resurgence in popularity, initially due to emergence of new post-punk revival Gang of Fours such as Clinic, Liars, the Rapture, Neils Children and Radio 4, and then the rise of Franz Ferdinand.

song:'Damaged Goods' by Gang of Four